Go fast, turn left. I am reminded of a slogan I have heard in reference to NASCAR racing. It doesn’t exactly describe fishing for tuna, but the left turn part is accurate. Keep the fish to the left, line up on them, and then set the net while doing a left turn around the tuna. Oh yeah, don’t forget the Captain’s “kind” words of encouragement over the PA system during the whole process.

A purse seiner is equipped to do all its fishing from the left side of the boat. All the winches, pulleys, cables and assorted support equipment are all set up to operate on the port side of the ship.

All the action takes place on the left side of the ship (nice finger!)

Over the past two days, I was amazed at a couple of things I saw. First was the fact that we were circled by a couple of Hughes 500 helicopters; one this morning and one yesterday afternoon.

I am surprised how many other signs of human life we are seeing in the middle of this large body of very blue water. I guess a lot has to do with the fact that tuna fishing is done at, or very near to, the equator, since this is where the fish are- makes since. I guess there are also a large number of fishing boats out there, all vying for those same elusive fish. 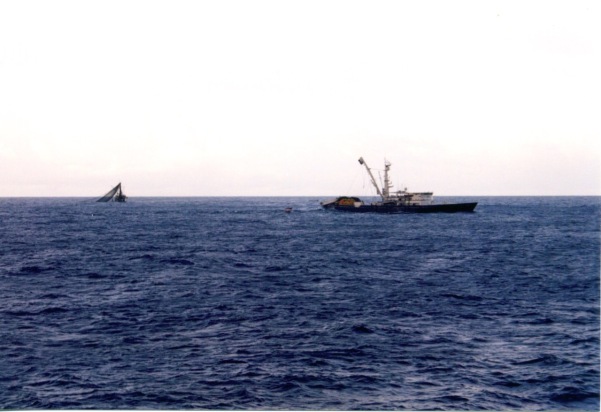 Fishing boats all over the place

The second thing that amazed me happened while we were finishing up a set last night that netted (no pun intended) us about 85 tons of fish. I was down on the wet deck watching the newly deceased fish slide down the chutes into the fish well. Earlier in the day Jean was telling me about a ritual by certain fisherman in which they take the heart out of a tuna and eat it. Supposed to give then the strength the fish had, or something along those lines (or maybe it just tastes good…).

Anyhow, as I proceeded to watch the fish do swan dives into the fish well, a couple of guys started grabbing skipjack and started to eat their hearts. They would enter through the gills and grab the heart (located between the gills). They would then proceed to munch away.

Tuna coming down the shoot on the wet deck

Pedro, the guy from Peru, was kind enough to offer me one, but I graciously declined. Jean ate it instead, and this morning was complaining about having the taste of heart in his mouth. Yum, yum!

Looks like things are picking up as far as fish go. As I mentioned, we got 85 tons last night, and 20 tons this morning. 105 tons in 12 hours. Keep this up and we will be home before Christmas for sure!

Rest of the today was fairly slow until about 1500 hours this afternoon. We made a set on a school, and as happens quite often, there was no sign of the fish. The purse was drawn and the net was coming in when we saw a large breezer in the middle of it. Great! Things look good!! As the net was drawn close to the boat, the part by the bow started to go under water. The corks that are normally on the surface (keeping the net afloat) were at least ten feet under water. The same thing happened a couple of sets ago, but not to this extent, so I knew what was in store for us.

Sure enough, the fish started to escape. Actually, some of the tuna bailed, as well as a couple of sharks. The net was sinking due to the weight of the skipjack down below (tuna tends to stay up near the surface with the skipjack staying below). 200 tons of fish tends to pull the net down. We lost maybe 20 tons, but we ended up getting 180 tons. 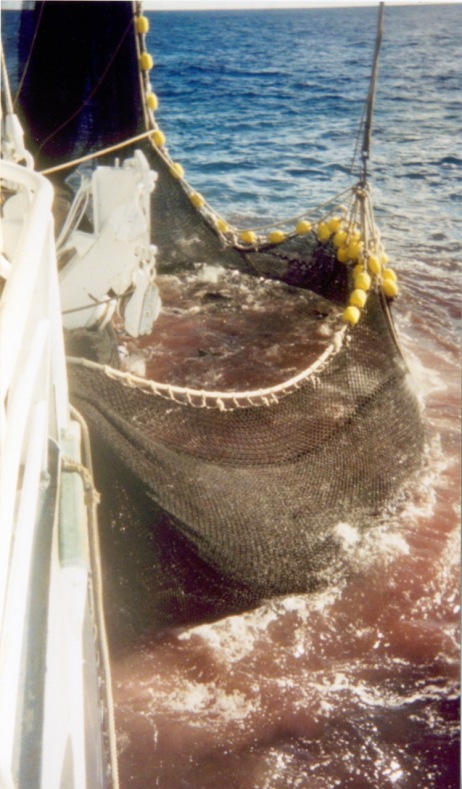 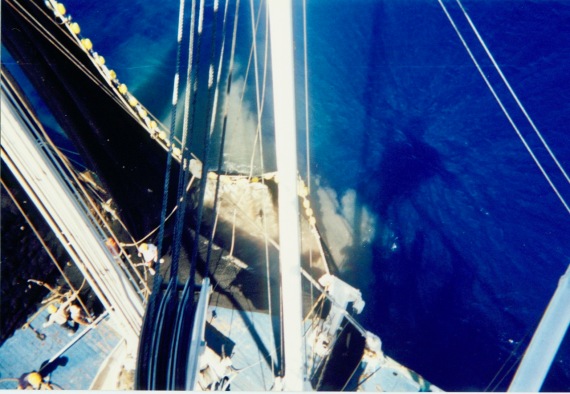 While the crew was pulling in the 180 tons, I was starting a 100 hour inspection on the helicopter. It was a beautiful day. Too beautiful.

With the boat stopped, there was no wind. No wind and about 90 degrees. 90 degrees, very high humidity on top of the pilot house, working on a hot engine. I think I sweated out of couple of gallons in a matter of a couple of hours.

Of course, when I got to thinking about it, I really didn’t care about the heat. After all, today I made the equivalent of two weeks salary at Robbie Land.