Damn, it is going to take me a year to catch up to today if I keep getting interrupted like I did while I was writing the last segment. I guess it is a good thing since interruptions mean fish.

The helicopter spotted another school of fish, as well as a floating log. We came upon the log first, launched the speedboat, and attached a “beeper” to the log.

A “beeper” is basically a radio receiver/transmitter that floats next to a log and awaits a coded signal from the ship before briefly transmitting an identifier and tone to allow the boat’s direction finding equipment to get a bearing. Beepers are used to be able to find the same log sometime in the future.

On occasion that the boat might run across a log with someone else’s beeper attached. Depending on the marking of the beeper (to identify its owner), it is either left alone or confiscated for future use.

After attaching the beeper we continued on toward the school of fish. The captain eyeballed the fish for about an hour from the helicopter before giving the signal. This time we caught about 20 tons of fish. Not bad, but a long way from the 1300 tons the boat holds.

The process from net release to completion took close to three hours. It is a very big net!

After completion, we found our log again and tied up to it to drift along with it all night long. The crew got up at 0500 hours in preparation of putting the net in the water at about 0545 hours- still pretty dark.

The idea is to lay the net out and draw it tight before light so that we can catch the fish that are sleeping under the log. I guess fish use logs as a “motel” at night. Schools like to hang out around logs, since logs attract all kinds of growth, which in turn attract little fish, which attract larger fish, etc. Last night as it was getting dark, I could see all sorts of little fish by the log, and I even saw a shark circling around. Very cool indeed!

Last night was spent taking apart my camera to see if I could fix it. Good news is that I was able to get it back together, in one piece, in the right order (I think). Seems that the camera decided to stop working a couple of days ago. The telescoping lens telescopes no more! I haven’t a clue what is wrong, except some gears are a grinding. Kinda hard to find anybody who knows anything about cameras in the middle of the Pacific… Good thing I brought two disposable cameras. Jean, the pilot, said that I could have use of his camera.

There is a joke about Samoans being on island time. Seems that they do things when they want to, and they haven’t got the good news about customer service. The only time I had the pleasure of experiencing this first hand was when I was able to go out at night a few times.

The first time was the second night I was in town, Tuesday. Since we were still at the StarKist cannery unloading, Jean and I hiked past the cannery and stopped at a place called the Fisherman’s Club. Wow! What an eye opener.

(Imagine the next two photos stitched together to create a pano of the cannery – yes, there was a time before cameras were able to easily do panos!) 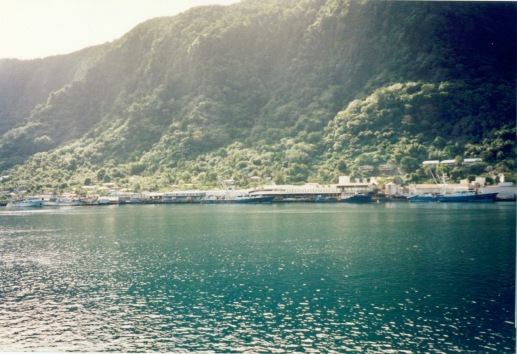 All that the “club” was, was a room with plywood floors. On one side were three pool tables, and the other side was a refrigerator – the kind you see at 7-11 that displays all the goods. Inside this half-empty fridge were six packs of about three kinds of bottled beer. The most exotic thing they had was Bud Ice.

Beer in hand, we went outside to sit at one of the aluminum picnic tables, away from the only group outside (pretty much the only group at the “club”, except for about a half-dozen pool players).

Now this was an interesting group, those outside with us. They all turned to watch the two white guys enter the bar, and as soon as we returned back outside and sat down, the welcoming committee came over to greet us.

I have yet to see a really attractive Samoan female, and these two were no exception. The only good looking women I have seen so far on the trip were way back in Honolulu.

I’ll give our welcoming committee some credit. After all, she did try to strike up a conversation. But there is something about a cigarette smoking Samoan chick with more hair on her upper lip than I sport… not really too attractive to me… She even feigned sadness after we left after only one beer. Too much excitement for this American kid. Strike one. 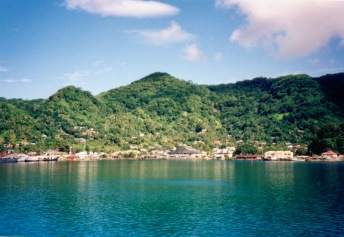 Looking across Pago Pago Harbor (American Samoa) from the cannery side

Wednesday night we thought we would try our luck again. This time we were across the harbor at the refueling dock, so we had fresh prospects.

Off to the Rainmaker Hotel and Lounge. Looked like it was a nice place 30 years ago, but now it was, shall we say, beginning to show signs of age. I think the Samoan philosophy is to only put money into something once, then let nature run her course.

We each had two local beers – tasted like Budweiser – and listened to the band play something. I think it was music. Once again, called it an early night. This excitement was going to make an old man out of me!

We decided to give a rest Thursday night after our last two excitement filled nights. After we finally got the helicopter flying Friday, Brian Douglas decided that he should take us out to wish us a Bon Voyage. We were going to the Yacht Club! Now you’re talking! Living the high life. Beautiful women… good food and drink… shiny crystal chandeliers… the works!

Big disappointment! (surprise, surprise). Remember the Samoan building philosophy? Holds true even at the Pago Pago Yacht Club. Same beer refrigerators. Same wonderful service (but a bit better than average, I must admit). The one thing different I noticed was the abundance of white people. Seemed this was the place for the transient boaters and local white folk to hang out. This being the case, we settled down for a hard night of drinking. We drank the place out of Corona’s- after two rounds!

We then moved outside to where the real festivities were happening. One guy was playing the guitar, another one playing one of his twelve harmonicas, both singing away. The crowd was going hysterical (by island standards)! For I minute I thought I was at an AC/DC concert.

I sat back and soaked up the atmosphere as I gazed past the yachts (Hobie Cats) lining the beach. I actually started to enjoy myself once I put everything into perspective. I cannot compare Samoa to Los Angeles. You try to and you go crazy…

We left to go back to the boat around 2030 hours. The Yacht Club closed at 2100 hours. Hmmm, night owls they are not…

All we had to do was wait for the Captain to arrive so that we could depart. He showed up about 2230 hours, but then we were missing our two Samoan crewmembers. Remember Samoan time??? Here we go again! They arrived about 2330 hours, and then we were off!

I wanted to stay up to watch the departure, so I fought off sleep and watched as the harbor lights slipped by… 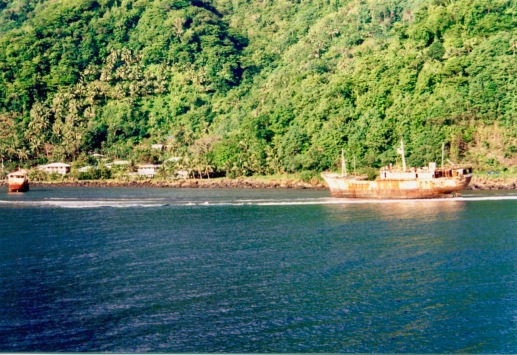