Snow equals cold and I don’t like the cold. For me to say I camped in the snow and I like it is almost one of those “stop the presses!” moments. Seriously.

After leaving Kingman, our caravan of three trailers was headed to southeast Utah. But that’s a pretty long haul when you are towing your house, so I wanted to make a stop. Problem is there isn’t much between Kingman and SE Utah except for Flagstaff, which wasn’t an option since it was damn cold there.

A winter storm had passed through the day before we made the trek, so there was plenty of snow to be seen on the drive down I-40. I despise towing my house on interstates, but sometimes there literally is no other option, so I sucked it up. But I-40 is one crap road. Literally. Potholes everywhere. A miserable drive when one is towing one’s house.

Northeast Arizona is the location of the Navajo Nation. It’s wide open with a lot of nothing there. But there is one small National Monument. That also happens to have a couple of free campgrounds, one of which is open in the winter. This became our destination.

The Navajo National Monument is a bit off the beaten path. I never thought I would make it here, so when the stars lined up and we needed a stopping point I jumped at the opportunity. Boy, am I glad we did!

Sunset View Campground was where we hoped to stay for a couple of nights. It had snowed the day before so I really didn’t know what to expect. Fortunately the National Parks Service plowed not only the road into the monument, but the campground loop itself. This despite a sign at the start of the main road into the monument saying it doesn’t get plowed.

Our caravan did the typical loop the campground to find the best spots trick, which was incredibly hard to do since all the spots were snow covered and it was hard to tell how big they were. My sister and brother in law have a larger trailer, and Sunset View Campground has a size limit which they barely fit. Turns out there were a couple of sites they could have fit into, but until the snow started to melt, it was impossible to tell this. We managed to find one spot big enough for them and Kelly and I took two adjoining spots.

Turns out I parked in a handicap spot. That explains the paved trail from my spot to the restrooms. Oops! Of course when there is 5 inches of snow on the ground, you cannot tell these things.

We ended up being the only rigs in the 31 site campground for the first night, with just a few other rigs the remaining nights. Our three night stay was incredibly peaceful. Something about the snow makes everything quiet and calm.

The monument itself has a visitors center and a couple of trails you can walk/hike to get a view of the canyon that houses an ancient village. The main pathway is paved and was (mostly) cleared of snow. There was another snow covered trail that descended a couple hundred feet into the valley that I took the morning of our departure.

During the warmer months there are ranger led hikes into the valley so you can get close to the village, but in the winter the monument is pretty dead. Just the way I like it! 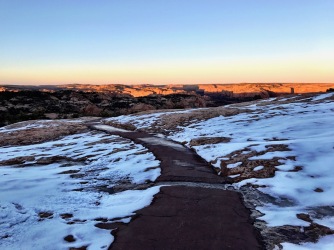 Yes, it was cold. No, I didn’t complain. It was magical. So I enjoyed the moment. Three nights I could handle. But it was enough and time to move on to the caravan’s final destination.

2 thoughts on “I Camped in the Snow and I Liked it!”