I’ve been at this full-time RVing game for coming up on 3 years now and I already see patterns developing. At least a pattern come winter time. For the second January in a row, I found myself visiting American Girl Mine Road in Winterhaven, California.

AGM is a convenient location just to the west of Yuma, Arizona. I spent 2 weeks here last year, which was the intention this year. But as all good plans are subject to change in this lifestyle, we ended up staying 4 weeks there due to circumstances which I’ll detail in a bit.

Onwards to this years unique additions to the American Girl Mine Road experience:

The primary reason why we hit American Girl again this year was so that we could get our teeth cleaned in Mexico. Los Algodones to be exact. Right (and I mean RIGHT) across the border on the California side of things (just outside Yuma, but the border crossing is actually in California) is the small little town of Los Algodones.

I’m firmly convinced it’s only reason for existence is to cater to the American snowbird population that flocks across the border each winter to get glasses, have dental work done, and pretend they are on some grand adventure in a foreign land.

While I’ve been to Algodones (what the town is usually referred to by snowbirds) before with my parents, I didn’t go there last year during my two week stay in the area. I made up for it this time around!

We went alone and we went with a group of people. Crossing into Mexico is no big deal. You literally walk across. You don’t have to “check in” or anything.

Getting back can be a bit more of a pain. If you don’t come back early enough you end up being in a long-ass line of snowbirds crossing back over. We tried to time it right to come back early enough to avoid the majority of the madness. Sometimes we were successful. Sometimes not. Though our Sunday crossing resulted in zero wait due to dental offices not being open so the masses tend to not flock over that day of the week.

I didn’t take many pics south of the border, so you only get a shot of Kelly petting a cat at a restaurant and a border patrol truck on a mound securing our borders (yes, I’m being facetious – see Kelly’s blog post about how well that works).

When we initially planned to stay at American Girl we were thinking it would be our usual two week stint. If I have learned one thing living this lifestyle, it is that plans are ALWAYS subject to change. Gotta be flexible.

After a couple of days of it being just being Kelly and me, some solo travelers that we met at the Xscapers convergence in Quartzsite showed up. It ended up being four additional rigs. And then our good friends John and Becky also showed up. Finally, Kym and Kevin made an appearance right at the end. Also, after many years of “stalking” online, I finally got to meet Becky in person.

What had started out as a the winding down of our winter socializing time turned into close to an additional month of being with friends. Including a Super Bowl party in the middle of the desert. Cuz that’s what nomads do!

The constant stream of new arrivals, and the lack of any place warm to head to next (that we wanted to actually see) resulted us in staying at AGM for twice as long as initially planned. 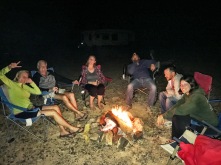 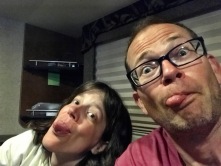 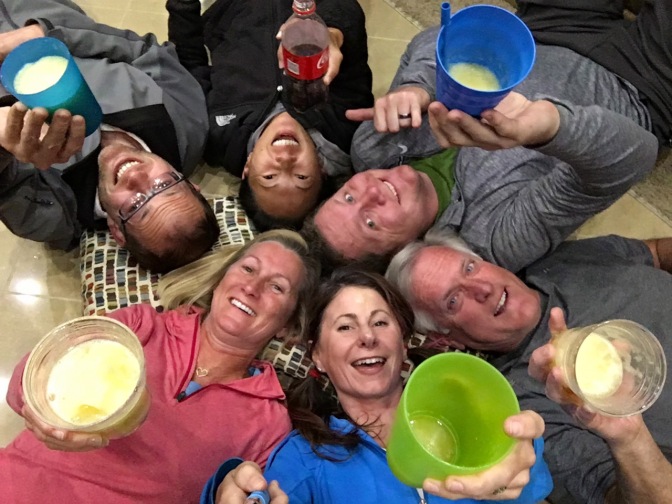 Just east of the exit off I-8 to go to American Girl is the start of the Imperial Sand Dunes (aka the Algodones Dunes). For the geeks among us, you will recognize this area as the Tatooine scenes from The Return of the Jedi. For the rest of us, it is a large stretch of very tall sand dunes that run north-south from about Glamis, California into northern Mexico. Yes, there is a border wall/fence running through it. 😉

We visited the dunes three times during our stay. Since this was my first time there, I wanted to walk back a bit. And by a bit, I mean not that far cuz it’s a real PITA walking up and down these dunes! Not to mention how much the wind was howling the third time we were there.

Oh, I almost failed to mention that the dunes are a HUGE off-highway vehicle recreation area. And the second time we went we discovered that holiday weekend (I didn’t even realize it was a holiday – nomadic problem) was the second most popular time for OHVs at the dunes. Oops! 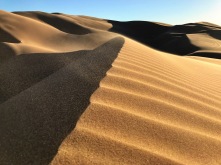 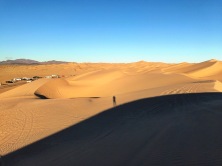 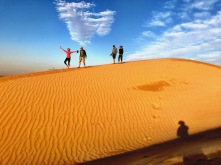 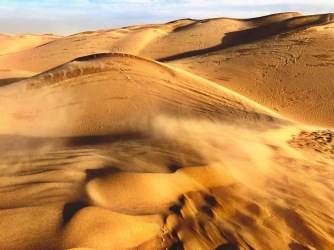 My preferred spot (up until now – we did some poking around and found a more secluded location should we chose to return) was about as far north as you can go in the American Girl area. Back up against a wash, you cannot have neighbors on one side, which makes me happy.

Said wash is normally dry. But it’s there for a reason. We experienced a couple of continuous days of rain which filled the wash.

At first I could only see a small stream. The wash area is pretty wide and when I stopped being fixated on the area right behind our rigs I saw what looked like a river. Sure enough, there was a massive amount of water streaming through the wash. Way cool to see, but a great reminder of what can happen in desert washes when there is rain in the area. 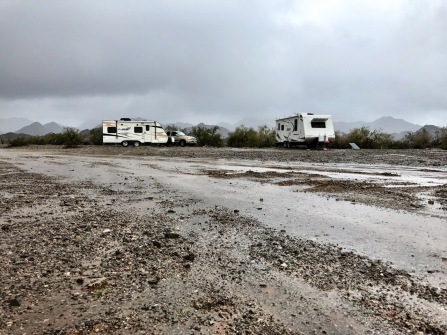 So that winds down my second visit to American Girl. Two years in a row are plenty. I’m feeling the strong need to do something else next winter. Famous last words. We shall see… 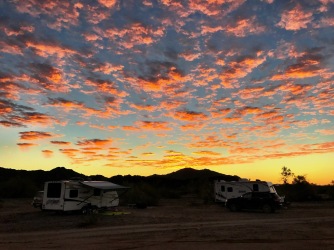