After 6 weeks of alone time I was back in the being social business. The time by myself had been great. Just what I needed. But it was time to get back together with friends, old and new.

You would think the nomadic life would be a lonely one, but it isn’t. Sure, there are times when I feel all alone, but I had those feelings in pre-nomadic life. Today, I have to make an effort to have alone time. Seriously. I have friends, or know people, pretty much everywhere. It’s weird, this life on the road. And it’s a great thing.

Once I hit the road I quickly learned about the great community of nomads. I first wrote about this community almost 3 years ago, shortly after I started this journey. As I write this on New Year’s Eve 2016, I’m literally in the middle of nowhere in the Arizona desert with a group of fellow nomads.

So after 6 weeks of looking inward, it was time to relocate to Crested Butte, Colorado. I had made plans to meet a fellow nomad who I only knew via Instagram, and it happened that a coupe of other nomadic friends would I had previously met were also there. Yeah, small world I live in.

From Leadville you have a couple of options to get to Crested Butte, which is nestled up in a dead end valley surrounded by towering peaks. First option is head way south, back over Monarch Pass, then north the Crested Butte. Yawn! I had done Monarch Pass already so I was looking to conquer a new one.

Cottonwood Pass is over 12,000 feet and accessed via paved road from Buena Vista. However, on the Crested Butte side it is dirt, so not exactly a quick route while towing. But I hadn’t been that way, it was less miles than the other route, and incredibly scenic. So up and over Cottonwood Pass I went! 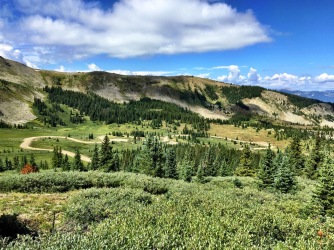 Washington Gulch Road is yet another one of those places that I’ve heard about from fellow RVers. It  has an outstanding view of both Gothic and Crested Butte Mountains, has a direct line of site to a Verizon tower and enjoys relative peace and quiet. My kind of place!

Crested Butte proper was a very OK town. It has a great vibe to it, unlike other Colorado ski towns I visited. It just felt right.

An ex-coworker has a condo in the ski resort Mount Crested Butte (right next door to Crested Butte and is directly at the base of Crested Butte Mountain). After I inquired as to what I should do and see in the area, he was kind enough to offer me use of his condo for a week. What a welcome treat! Unlimited showers. That’s a HUGE deal for full time RVers!

The condo was located right in the heart of the Mount Crested Butte action. You could walk to the ski lifts, which are heavily used by mountain bikers in the summer. There is a free shuttle bus stop about a block away, where you can catch a ride into Crested Butte which meant no parking hassles. 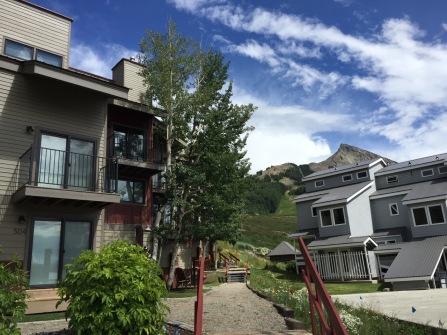 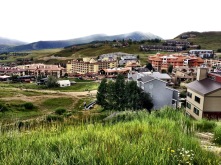 My week long stay in the condo was like a mini-vacation. I left my rig out on Washington Gulch Road under the watchful eye of my friends staying next to it.

My friends Shawn and Chris had been at Washington Gulch for a bit. Kate and Iain showed up about 5 minutes before I arrived. Tori and Skyler showed up right at the tail end. It’s always great to see old friends in great locations.

I first learned of Mandy via Instagram (which is the way I meet 99% of my friends). She reached out to me and we ended up chatting back and forth. Eventually we decided we should meet and settled on Crested Butte, so she eventually joined the party.

Mandy is an incredible photographer and was kind enough to allow me to tag along as she photographed some of the local beauty.

Emerald Lake is up at Schofield Pass and was a destination Mandy and I headed to one afternoon. She then decided she wanted to shoot the lake at sunrise, so after a pre-dawn departure we arrived at the lake in freezing temperatures so that she could work her magic. 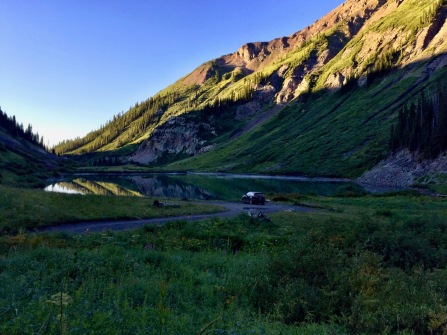 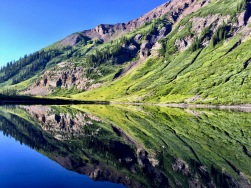 Picture by Marshall (using Mandy’s camera). Editing by a pro (aka Mandy).

After doing a little poking around for places to hike to, I discovered Copper Creek Trail just outside the tiny town of Gothic, part way up the road to Schofield Pass. I didn’t have a very hard time talking Mandy into visiting when I mentioned we could check out Judd Falls. Mandy LOVES waterfalls, so that became our destination. After some rock scrambling and creek fording, Mandy found the perfect location perched on a cliff to photograph the falls. 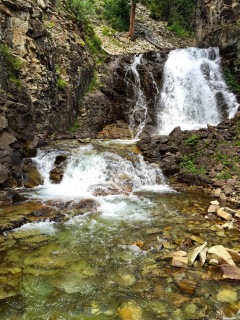 Mandy was off to camp a few days with her family, but we made plans to meet up to visit Crystal Mill. The plan was for me to meet Mandy in Hotchkiss which was the nearest place I figured we would have cell service. Due to a miscalculation as to how long it would take me to travel County Road 12 (a dirt road) over Kebler Pass and then head south (the opposite direction from Crystal Mill) to find a suitable meeting place, I arrived with a couple of hours to spare (I had only my Jeep so I could haul ass).

I looked around for something to do while I killed time and I discovered that the north rim of the Black Canyon of the Gunnison National Park wasn’t that far away. I had been wanting to visit this National Park but hadn’t found myself camping within striking distance of it, so I jumped on this opportunity to give it a quick look.

An added benefit of my current location is that the north rim is the least visited side (the south rim is where the main visitors center is located, as well as the campground). I was able to enjoy the views with zero crowds.

While it was a very quick visit, as I had to get back to Hotchkiss to meet Mandy, I was able to drive the entire rim road, make a stop at each of the lookouts, and was able to (briefly) enjoy the views. Black Canyon of the Gunnison is definitely worth the stop!

Perched on a rock outcropping above the Crystal River, the Crystal Mill is an old powerhouse that offers a great photographic opportunity. However, it isn’t easy to get to.

I met Mandy and her parents in Hotchkiss and we were off to McClure Campground for the night. Once we arrived and set up camp, Mandy and I took off to scout out the Crystal Mill.

We took my Jeep and headed down the goat path of a road in the direction of the mill. Part way down it the rain started and we decided to turn around so that we didn’t get stuck by slick rocks in my 2 wheel drive Jeep. Turns out that we had gone past the hardest spots and could have easily made it to the mill. And we might have even made it back before the road became too slick, but we exercised good judgment and turned around.

The next day we had Mandy’s parents drive us partway down the road to a good place for them to park their truck and enjoy the scenery while we set off on foot to the mill. Mandy and I enjoyed the hike to the mill, stopping along the way to photograph the river.

Crystal Mill was as gorgeous as I had anticipated. The only bad part about our timing was the mill itself was backlit, so it provided less than optimal lighting for Mandy.

4 thoughts on “Back to Being Social – Crested Butte, Colorado”