My stay in Utah was brief, with just the one stop at Zion. It was too cold to head to the next intended destination of Bryce, so a dip back into Arizona was in order. Chasing warmer weather. #nomadproblems

There aren’t a whole lot of boondocking options in the general area. Really, Badger Creek Campground was the only realistic option, yet it is rated as needing a 4×4 per the Campendium review. After reading the single review it was decided that we would try and get to it. With our 4×2’s. Towing our houses. Sometimes you just gotta go for it, right? 😳

Turns out four wheel drive isn’t really necessary. Probably a good idea for one section. Oh, and there is a sandy stretch that can be interesting. But, yeah, not really required. But definitely recommended! Meh, you only live once! And I did end up having to tow Kelly out after her trailer’s tires fell into a rather large rut as we were departing.

After about a 3 mile drive down a mainly cooperative gravel/sand/dirt road, Kelly and I arrived at our destination. While there are other turnouts where you could camp, the prime spot is literally at the end of the road.

Perched high above the Colorado River, right on the edge of a cliff, this is one of the best boondocking spots you can imagine. That is if you are into peace and quiet, great desert views, the sound of rushing water, and California Condors.

Perched on the edge.

View from my house. 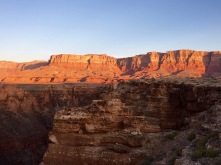 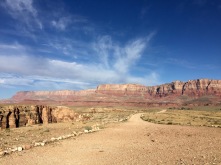 From the end of the road looking west towards Vermillion Cliffs

Looking northish up Marble Canyon. Vermillion Cliffs in the distance. 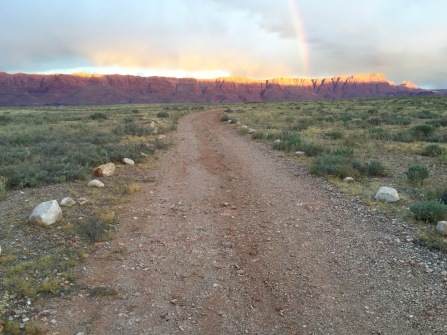 Literally the view from our campsite. Yeah, it didn’t suck! 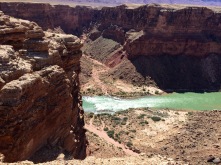 I would sit here and watch the river. Until my ass was sore. 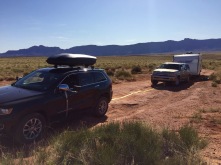 LJ pulling Kelly out of trouble.

To the west, north, and east of Badger Creek Campground are the Vermillion Cliffs, which are one of the five steps of the Colorado Plateau. They are incredibly gorgeous to stare at all day. They also happen to be one of the very few release sites for the endangered California Condor.

The California Condor is a majestic creature, but is also very endangered. From a low of 27 birds in 1987, they have made somewhat of a comeback thanks to captive breeding. Now the population stands at around 435 birds (as of December 2015), 268 of which are in the wild. Only 75 birds live in the Vermillion Cliffs area, which encompasses a portion of Northern Arizona and Southern Utah.

I tell you this to impress upon you how rare these birds are. And how lucky we were to be visited by them on multiple occasions.

Let me tell you, a bird with an almost 10 foot wingspan is beyond impressive soaring right above you. I feel so fortunate to have witnessed this on multiple occasions. Almost daily you could see them. Sometimes off in the distance. Sometimes right in front of you.

Some of the condors have radio trackers on them. We would be visited pretty much daily by volunteers from The Peregrine Fund with their radio tracking gear looking for the birds. They never seemed to time it right to be there when the condors were in the immediate area. 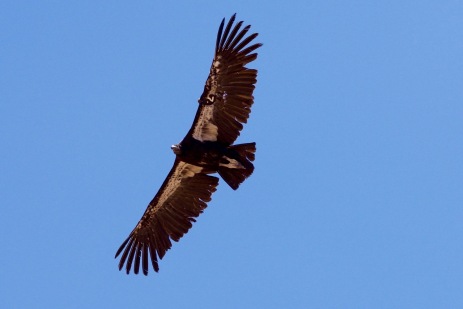 Photo courtesy of Kelly (who has a real camera).

Got tired of flying.

The California Condor isn’t the only endangered species hanging around in these parts. The pediocactus bradyi, aka Marble Canyon Cactus, is a really small prickly thing that only grows in Marble Canyon. Specifically in the soil at the edge of the canyon. In other words, right where we were staying.

At first it was really hard to spot the little suckers as they are tiny and blend in. Then once you know what to look for, you start seeing them. It helps that people have outlined many of the locations with smaller rocks. Of course if you are oblivious, you don’t see this and walk right on them. 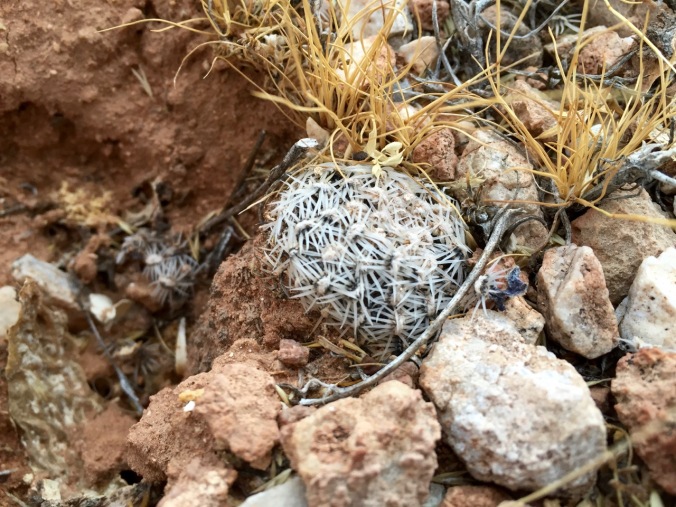 Just upstream of Marble Canyon is Lee’s Ferry which is the only place for about 260 miles that you can easily access the Colorado River from both sides.

Right below us on the Colorado was the first of many rapids in the river, and also the first spot river rafting expeditions could pull over for the night. Even though we were only a few miles downstream of where they started (Lee’s Ferry), every couple of nights there would be a group of rafts pulling in for the night. Apparently they would get a mid-afternoon start and call it a day pretty soon after. 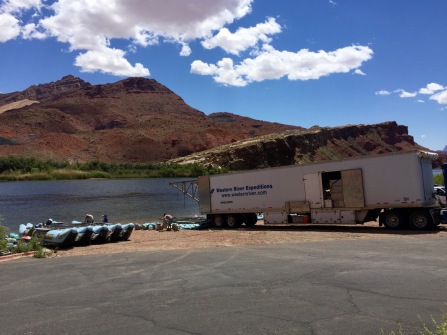 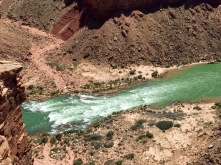 View from our campsite of rapids and rafts (right side far shore).

Lee’s Ferry is the very southern portion of the Glen Canyon Recreation Area (and the very northern part of Grand Canyon National Park) and offers some great hiking. We ventured into Upper Cathedral Wash and never did find the oasis that we had read about. Hiking up one wash resulted in a dead end. Then we trekked up the other wash and oddly enough, came to another dead end. Um, OK.

We should have done the Lower Cathedral Wash which takes you down to the river. Next time! 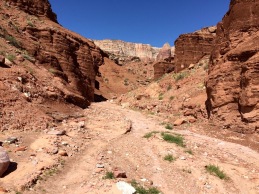 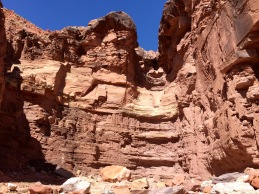 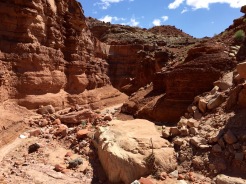 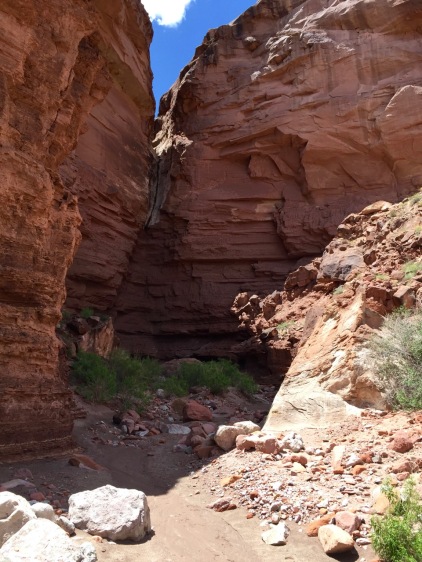 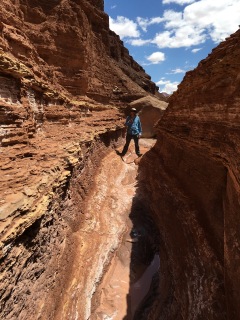 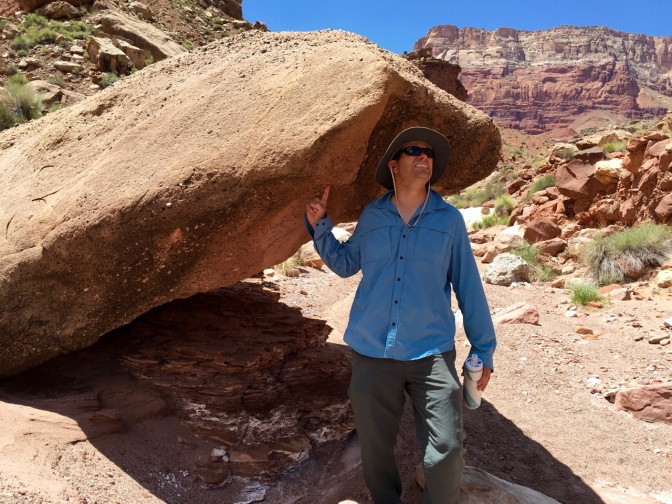 Just downstream of Lee’s Ferry, and spanning Marble Canyon, is the Navajo Bridge. The original bridge was completed in 1929 and was the replacement for the actual ferry at Lee’s Ferry.

A replacement bridge was put into service in 1995, right next to the original span (which is open for pedestrian traffic only). The bridges cross into the Navajo Indian Reservation, thus the name. They were clever that way. Naming the bridge that is. Come on people, stick with me! 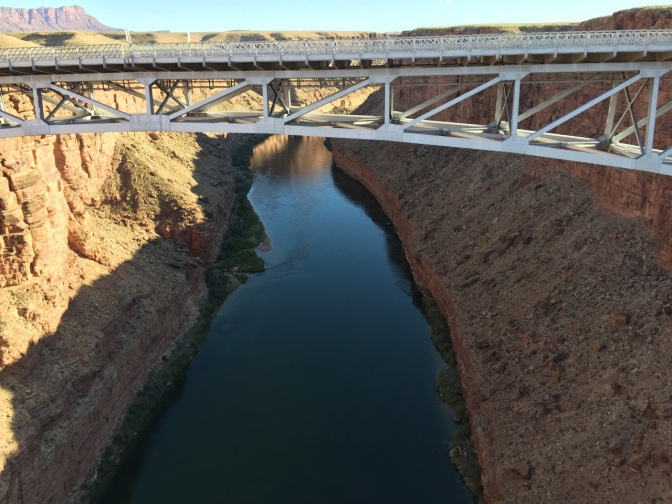 Kelly had never seen Horseshoe Bend before. I had last year when I stayed a few days in Page, Arizona as part of my sister’s wedding celebration. Turns out that my nomadic friends Jase and Lauri were staying a little north of Page and we all decided to meet at Horseshoe Bend.

I didn’t get any really good shots of Horseshoe Bend this time around, so you can suffer through the single shot below, or look at the shots during my visit last year. I did get a decent shot of a bug swarm. The bugs were horrible this year! 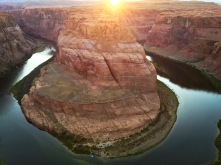 2 thoughts on “Camping with the Condors – Marble Canyon, Arizona”