Between Christmas and New Year’s I joined a rather large group of nomads in the Anza Borrego desert. This gathering is becoming an annual event and I wanted to be a part of it this year to see what all the hoopla was about.

I was there for 6 nights, but some people where there from before Christmas to just after New Years. There were pushing 40 rigs total (over half of which were Airstreams) and close to 80 people. In other words, there were A LOT of people, some of which I never ended up meeting. It got to a point where it was incredibly hard to keep track of people and actually talk to everyone. I did get a chance to meet some nomads I only knew from Instagram.

Aerial view of our group:

We stayed at Rockhouse which is allegedly a large piece of private land that allows boondocking and is just outside the state park land. Nothing more than a large dirt/sand area, our group took over a big section of Rockhouse and were definitely the dominant group there. Whatever that means. 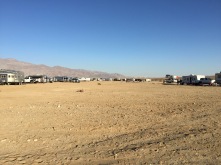 My “neighborhood” of the camp 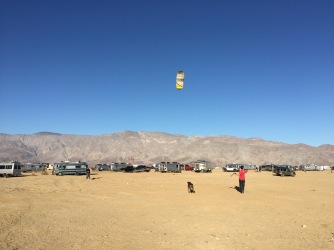 Our camp from the hills

Aluminarium has a great post showing the Instagram accounts of everyone in attendance, in case you are into those things.

Photo by Leigh of Aluminarium

As one can imagine, there was a lot of socializing during my stay. During the day people would chat in smaller groups, but during the evening we would all gather around the fire pit for happy hour and onwards.

Fire the first night I was there when the group was still small. 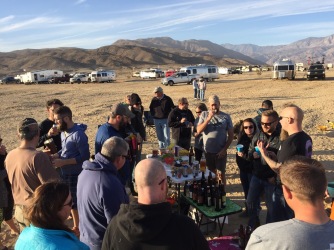 Oh, did I mention the DJ setup and karaoke machine? In the middle of the desert. Yup, my people know how to roll!

There was something going on most days as far as getting out and exploring. Whether it was a group thing, or a solo outing, I managed to see a bit of the area.

A small group of us hiked to Palm Canyon one evening and ended at an actual oasis in the desert. Never been to one of those, so that was a cool first.

View from the oasis

Headed back to the trail head

Another day I hitched a ride on a little 4×4 adventure that eventually brought us to Font’s Point (one of the more spectacular vistas in the area). I returned another evening for the sunset. 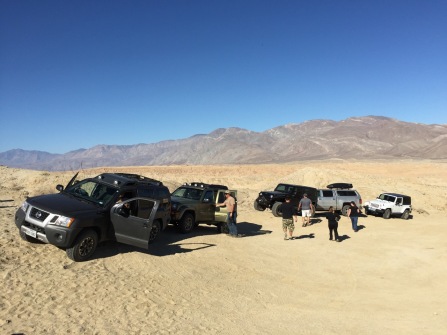 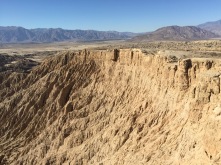 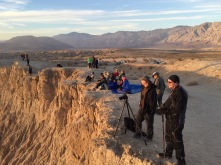 I checked out the famous Galleta Meadows with its very awesome metal sculptures in the middle of nothing. Galleta Meadows is actually both south and north of town. I spent a bit of time at the south side of things and had every intention of heading up north until I was intercepted to go off roading. I only briefly made it to the north end, to see the famous serpent that goes under the road. 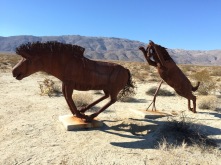 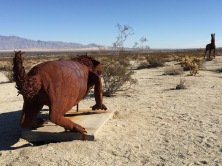 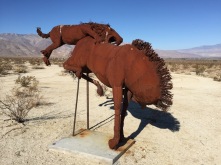 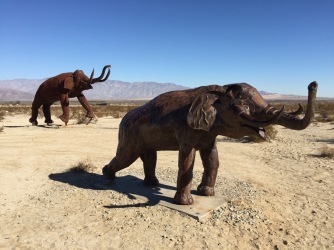 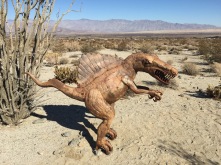 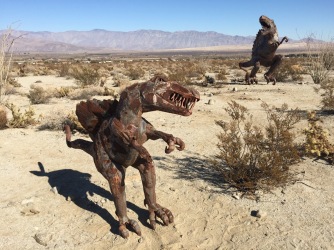 Careful with the Jeep!

No stay at Rockhouse is complete without a short hike up to the rock sculptures at the top of the hill. Our group may have even added our own addition. 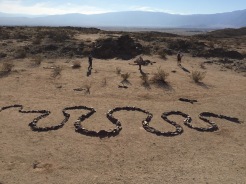 Everyone was here to celebrate the arrival of the New Year and to do so, a wooden borrego (bighorn sheep) was constructed and was sacrificed to the fire at midnight. I wasn’t feeling it that night, so I actually crashed well before the borrego met its fate, but I hear a good time was had by all in attendance. 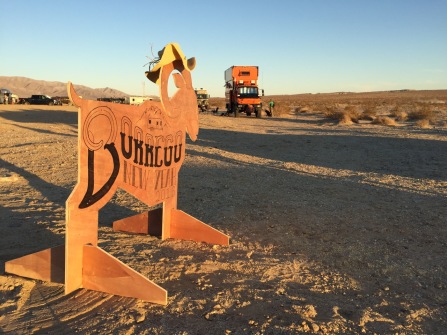 6 thoughts on “Ringing in the New Year – Borrego Springs, CA”