I first learned of the Elwha River after watching the movie DamNation, so when I knew I would be in the area, I had to check it out. I am very glad I did.

Located to the west and south of Port Angeles on the north side of the Olympic Peninsula, most of the Elwha River is in the Olympic National Park. The Elwha River is 45 miles long and until recently had two hydroelectric dams that blocked the migration of salmon and other fish. After 100 years, the two dams were removed as part of the largest dam removal project in history. The second dam had its last piece removed on August 26, 2014, and I happened to visit one year to the day after that momentous day.

I could go into great detail about why the dams were removed, etc, etc, etc, but I won’t. Those interested, can read about the Elwha Ecosystem Restoration Project.

I chose to stay 2 days at the Elwha Campground, which is a a 40-site National Park Service campground that offers dry camping. It is also across the road from the Elwha River and within striking distance of the two dam sites, so it turned out to be the perfect location for my quick visit.

About the only good solar spot in the campground.

After I had settled into the campground I headed south a couple of miles to where the Glines Canyon Dam once stood. Also known as the Upper Elwha Dam, the formerly 210 tall concrete structure had it’s last piece removed on August 26, 2014. I learned this fact one year to the day after as I was standing on what used to be the west side of the dam and is now an overlook.

Only part left of east side of dam

Remainder of west side of dam looking from the end.

Lake Mills was behind the Glines Canyon Dam and the lake bottom was still very much present, one year after the Elwha River flowed free again.

The following afternoon I attended a ranger-lead walk along the edge of the former Lake Mills where I learned about the revegetation efforts. There is very little (as in no) funding for this, so it is a slow, methodical process. More of a jump start to let Mother Nature do her thing than a full-out plant stuff everywhere process. And it is working very well. Native trees are growing very quickly along the old shoreline and plants are spreading out as hoped, all part of the second largest ecosystem restoration program undertaken by the National Parks Service. For those curious at home, the Everglades is the largest.

I was the only one on the walk, so I got all my questions answered and didn’t have to compete with obnoxious tourists. Among other things, the ranger pointed out burned stumps left over from when the land was cleared for the lake. It was amazing how well the cold water preserved them as they looked like they were recently burned, rather than having been torched in the 1920’s. 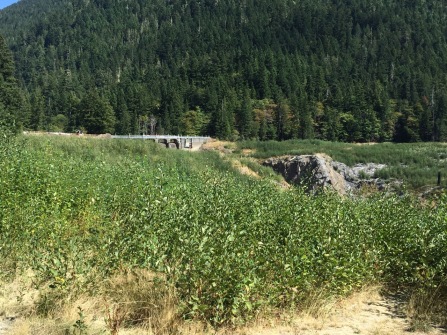 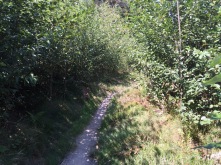 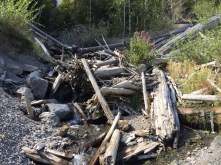 Logs at edge of former lake (yes, I would be underwater here) 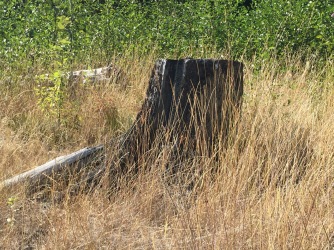 The Elwha Dam was located just 5 miles upstream from the mouth of the river and created Lake Aldwell. As the downstream dam, it was the first one removed, therefore the old lake bottom is further along in its revegetation process. While I was there, a crew was spraying invasive plants and weeds in an effort to allow only native vegetation take hold.

Access to the former dam site was via a closed road that hiked down about 1/2 mile to where you could view the river. This area is much less accessible than the Glines Canyon Dam site and really isn’t setup for spectators. That didn’t stop me! I spent a few minutes surveying the former dam site and I wasn’t alone. There was a small group of guys that appeared to be monitoring the restoration progress. Or just standing around shooting the shit. Hard to tell from a distance. But one of them had a reflective vest on, so one can only assume they were official. 😉 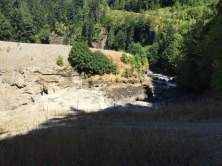 Though the Elwha River is once again free flowing for its entire length, due to there being less than 3 percent of normal snowpack the previous winter, the river wasn’t very mighty when I visited. It actually looked like a large creek. The ranger commented how during a year with normal snowpack the river would be much deeper and wider.

More than likely the low river flow was not helping the return of the migrating salmon, but the salmon were definitely coming back. There are antennas at certain points along the entire length of the river that monitor how far up fish travel. A certain number of fish are intercepted and tagged at the mouth of the river, which is how they are monitored. ‘Cause fish don’t come stock with radios embedded in them. In case you were wondering.

The ranger also told me where I could go to have the best chance of seeing salmon swimming upstream, though I didn’t see any when I visited that part of the river. I just enjoyed a very peaceful stroll along the river, the only person there.

The river should be covering these rocks

Best place to spot migrating salmon, so I was told

The mouth of the Elwha River has undergone a radical transformation since the dams were removed. The Glines Canyon Dam alone held back over 21 million cubic yards of sediment, which meant that the river mouth wasn’t receiving the sediment vital to form the habitat for sea life. The ranger had pictures of the river mouth (known as the Elwha nearshore) pre-dam removal and then a couple after removal and the change was amazing. The sediment is once again reaching the mouth and creating the sandy environment needed to allow life to flourish. 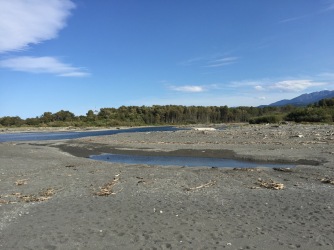