Marshall and aviation museums go hand-in-hand, so it would seem. While in Seattle my cousins and I, as well as my uncle, decided to take a trip to The Museum of Flight located on Boeing Field in Seattle.

I had visited the museum many, many moons ago, but things have changed, as they often do. The museum has received a couple of major expansions since my last visit, and seeing how my memory isn’t what it used to be (who am I kidding? I’ve never had a good memory), it seemed appropriate to visit again.

According to Wikipedia, The Museum of Flight is the largest privately held air and space museum in the world. Huh, that is pretty cool! Even a little impressive. Consisting of an east and west campus, as well as an outdoor airpark, there certainly are a lot of aviation thingies to see.

Before we continue, I must admit I have a problem. Ever since visiting the US Air Force Museum in Dayton, Ohio last summer, I compare all aviation museums to it. Which just isn’t fair to all the other museums. Because nothing is going to top the US Air Force Museum. NOTHING! Yet I still compare. And am constantly disappointed. I need to seek professional help for this problem.

Now that I have confessed to my problem, I am going to say I wasn’t overly impressed by The Museum of Flight. I probably should have been impressed as it’s a great museum. Large. Lots to see. Cool planes. Space stuff. But I was like ho-hum the entire time. I guess my point is that if you are going to tour around the country and visit aviation museums, save the US Air Force Museum for last. Or you too may suffer from being jaded.

NOTE: The majority of The Museum of Flight pictures were not taken by me. My 13 year old cousin (my cousin’s daughter, so my first cousin once removed as explained here) commandeered my iPhone and handled the photographic duties. Which explains why I appear in a couple of them. It’s hard to take pictures of yourself when you aren’t holding the camera. Trust me, I have tried.

Just inside the main entrance is the smaller of the two space galleries, and is where we started out exploration of the museum. Pics below.

The Great Gallery is an older part of the museum and the one I remember visiting back in the day. There is quite the variety of aircraft here, from my personal favorite, the SR-71, to civilian aircraft, other military aircraft and planes from back in the olden days. Oh, technically it isn’t an SR-71. It just looks like one. It’s actually one of two M-21’s built for the CIA and is the only one surviving. Not that you care. So onto the pics.

Uncle, me and Michelle

When The Museum of Flight opened in 1983, it was housed in the Red Barn. The Red Barn is Boeing’s original manufacturing plant, built in 1909. It was donated to the the museum in 1975 and underwent restoration. This gorgeous structure housed the Boeing Story exhibit as well as a recreated factory workshop.

The newest addition to the museum is the larger of the two space galleries. Contained within is a Space Shuttle Trainer and other space artifacts. 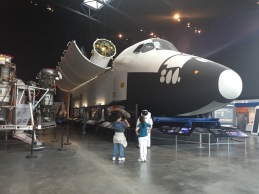 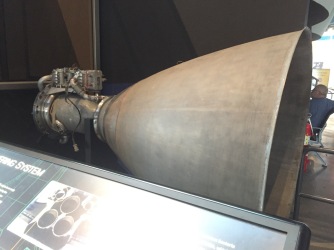 The outside static aircraft display includes a Concorde, a Boeing 787 Dreamliner (test aircraft), and the first jet Air Force One, all of which we went into. There were plenty of other aircraft you could walk around, but those were the only three you could go inside. 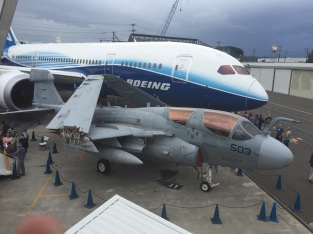 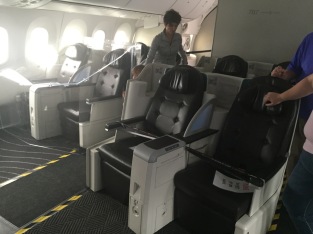 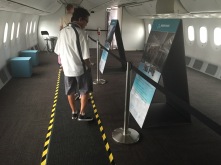 Our final stop was the two story Personal Courage Wing, which houses aircraft from World War I and World War II. This might have been my favorite part of the museum. Yeah, let’s go with that!