There is a mythical place to stay when visiting the Tetons. A place with views so grand that they had to be seen to be believed. A place that all the cool kids talk about. And the best part? It is free to stay there. Oh, yes, could this be the holy grail of camping spots? It was a tough mission to find out, but we decided take on the task.

The Upper Teton View is the place of legends. OK, maybe not legends, but it is a pretty sweet place to camp for a bit. Located just outside the Grand Teton National Park on Forest Service land, the prime spots at Upper Teton View offer unrestricted views of the Teton mountains and the valley floor. Located up a slight hill and accessed via gravel roads, Upper Teton View turned out to be everything we had heard.

Upon arrival we found that the area was mainly vacant. As this is dispersed camping, rather than a developed campground, there aren’t defined campsites to use. Instead, there are areas you can plant your RV (or tent). The prime area, with unobstructed views of the Teton mountain range, was completely available. We positioned my house to get the best views out of the side and front windows. We then parked the Jeep in such a way as to “reserve” the area next to us for Dave and Kelly, who would be joining us the next day.

Dave and Kelly couldn’t get enough of us and were following in our footsteps. OK, maybe that wasn’t the case, but they were becoming regular camping buddies as this would be the third time we had been together. Being a nomad, you might see someone multiple times in a fairly short period of time, then you won’t see them for a year or more. Not sure when I will next run into Dave and Kelly as they were headed east as we headed west, but I am sure our paths will cross down the road.

For the last 2 nights of our 7 night stay, we were joined by Kate and Iain, which meant Kathy and I were surrounded by Airstreams. I had briefly met Kate and Iain during my 6 months in Austin but had never camped with them, so it was great to have them join our little group.

First night we were by ourselves

Then Dave and Kelly joined us

With the addition of Kate and Iain, the whole group had assembled

Upper Teton View was a great base for exploring Grand Teton National Park, the town of Jackson, and the surrounding area. It was all that we had hoped it would be, and other than the mosquitoes (not a problem other times of the year), it was a perfect spot to spend a week.

Never got tired of the view 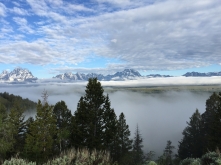 Being out in the middle of nowhere means different thing to different people. To some it may mean just being outside of town. To others it means being in the middle of West Texas. One thing I think we can all agree on is driving 180 miles to pick up a package means you are pretty close to being in the middle of nowhere. That’s was yesterday’s “journey”. Tonight’s was by being joined by good friends Jen and Jesse ( @ontherogueus ) to watch the sunset from the dunes. I’m still in the middle of nowhere but I’m no longer by myself. 🤓
The other night I didn’t sleep well (shocker for those that know how “well” I sleep 🙄). Couldn’t concentrate at work so after a short conversation with my boss, I took the day off and played tourist. Ended up at this gem of a find off Route 66. Hiked to the top, walked the rim, contemplated the fate of the Universe. Ok, did 2 of the 3.
Other than a couple of in-transit overnighters, I haven't camped alone since June 2018. This week I'm getting some 'me' time after spending a few weeks being uber-social in the Las Vegas area. Looking forward to some solitude before getting back at it next week for a nomadic Friendsgiving get together. In the meantime, I'll be right here. A 'new to me' place that so far is proving to be the right choice.
I don't think I've dealt with an iced up vehicle since I was a teenager. So, yeah, it's been a while. . One of the advantages of having a house on wheels is that you don't have to deal with this stuff unless it turns you on. It definitely doesn't do anything for me, but I'm unable to head south quite yet. Soon. Very, very soon. . What sign do you take it's time to move to warmer weather? Or are you one of those people that enjoys cold, biting wind and iced up vehicles?
The great thing about this lifestyle is choices. Some people like the space of a large rig. Some people, like myself, are looking to downsize to a small, nimble rig that can fit just about anywhere. . Another cool thing about this lifestyle is learning how little one really needs in terms of material possessions. I have far less now then when I first launched in 2014. But not everyone does well with so little. For some it’s an ongoing quest to figure out where to stash all the things. . This is a new one for me. Never have I seen a coffin storage unit on top of a fifth wheel. A rig that has massive amounts of basement and interior storage compared to what I have. 🤷🏻‍♂️
The things you find while traveling across the country. This one was an unexpected surprise directly across the street from the overnight spot. You Millennials probably don’t have a clue who he is/was. 😯😬🤷🏻‍♂️
%d bloggers like this: