So I decided to make that my destination right after my visit to Caprock Canyons State Park. Turns out I should have done the two parks in reverse order (stay tuned for the explanation).

I booked 5 nights at the park and pointed my house north to make the fairly short trip from Caprock Canyons. The approach to Palo Duro was different than Caprock Canyons. With Palo Duro you had no idea you were approaching a canyon. All you saw was the vast plains of the Panhandle of Texas. As you approached Caprock Canyons you could see the escarpment rising up, so you knew something was ahead.

So there I was, headed east towards Palo Duro Canyon State Park. I knew it was just ahead, cause, you know, GPS never lies. But I couldn’t see anything. Then all of a sudden the canyon started, as a small gash in the plains. It really became noticeable once I checked in and headed deeper into the park. Boom! There was this large canyon with a very steep grade heading down to the floor. 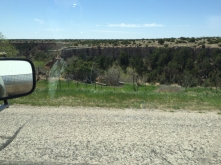 Oh, wait. I see the beginnings of a canyon.

And there she be…

I arrived on a Friday afternoon in the first half of March, so definitely not peak season. I had a reservation, but with Texas State Parks, you reserve the ability to stay there. You don’t reserve a specific spot. So spots are handled in a first come first served basis even for people with reservations.

There are three RV campgrounds in Palo Duro Canyon (not counting the equestrian  campground). Having never been here before, I didn’t have a clue which one I wanted, but I had seen pictures showing RVs parked up pretty close to the canyon walls. So I requested one of these spots, which turns out is in the Mesquite camp area – the furthest campsite in (about a 7 mile drive from the entrance). I had blind faith in the ranger who assigned me a spot, but she was correct as I later drove through the Sagebrush and Hackberry camp areas, which weren’t nearly as impressive.

I was assigned site 87 which was close to the east wall of the canyon. The view from my front door was impressive! So I was happy. 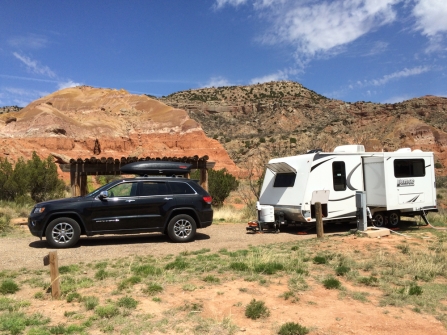 Awesome view from my rig

Not a bad office view 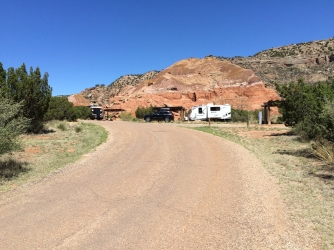 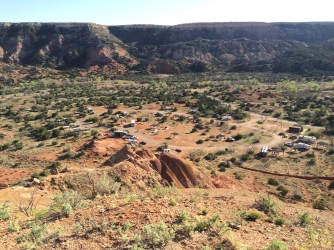 There was absolutely zero Verizon cell service in the park, but very good AT&T service (the tower was located close the the north end of the canyon). Fortunately I was now packing an AT&T cell plan, so this is what allowed me to work here.

Plenty of hiking is to be had in Palo Duro Canyon State Park. The official park trail map shows most of the trails, however there are some newer ones that aren’t shown, as well as some unofficial ones that are scattered about.

One of the unofficial ones starts from the Mesquite camp area and climbs up the side of the canyon right behind the campground. It provides a great way to get up on the canyon rim (well, there is some goat trail action to get all the way to the top) and offers a birds eye view of the campground. I climbed up it three or four times, twice all the way to the rim of the canyon. It was, um, steep and slippery in several spots, so I made great use of my hiking poles. They saved my ass on more than one occasion.

The steep part at the beginning

Looking down the steep part 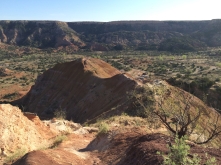 Looking back, partway up 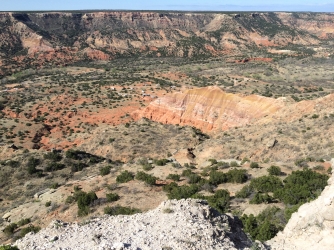 One morning I set off to do a little bit of hiking starting from the campground, going up the unofficial trail straight up the side of the canyon, to do a bit of exploring on the rim. The trail map showed a track I could take that leads to some overlooks. I ended up hiking almost 12 miles, never finding the overlooks (and having a discussion about the lack of them with another hiker). On the way back to camp I found one of the new trails that is not on the map but marked via signs. Yeah, that was a bit of adventure.

View from top of the canyon looking across

Backside of the canyon 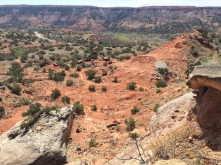 Going down the “official” trail

I also made sure to do the most popular trail in the park – the Lighthouse trail. The Lighthouse is a 310 foot rock formation that allegedly looks like a lighthouse. I like lighthouses, so this was a natural choice. And since I love crowds (catch the sarcasm?), I thought that the most popular trail would be right up my alley. Fortunately I got started before the crowds so that wasn’t an issue. The Lighthouse was big and I guess looks like its namesake if you squint. You could climb up to it if you so desired, and I desired. On the way back I saw two rattlesnakes. One that was pissed off and rattling away. Turns out a young couple ahead of me thought it would be wise to throw rocks at it. Really? 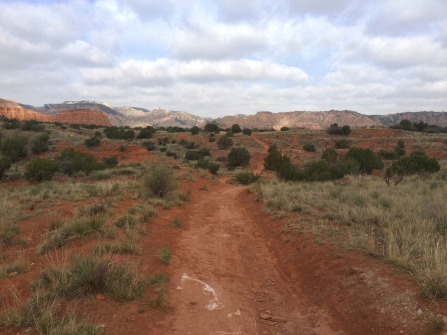 Lighthouse Rock is out there. Somewhere.

Lighthouse Rock on the right in the distance.

The views at Palo Duro Canyon State Park are fantastic for sure. However they were a bit of a letdown after having just visited Caprock Canyons State Park, where everything was a brilliant Martian red. I think. Not 100% sure as I have never been to Mars and we all know how pictures can lie. Palo Duro Canyon seemed muted in comparison. Don’t get me wrong – Palo Duro Canyon is gorgeous. Stunning. But definitely not overflowing with vibrant colors like my previous stop.

I would suggest one stops first at Palo Duro Canyon State Park before heading to Caprock Canyons State Park. This way Palo Duro Canyon will seem incredible. Gorgeous. Breathtaking. Then once you hit Caprock Canyons things will be taken up a notch. You will be rendered speechless. I wish I had done the two parks in opposite order as I think I would have had a completely different experience at Palo Duro Canyon. Fortunately Kathy hasn’t been to either so I have a second opportunity to do it in the correct order!