Kathy had the dream of putting on her own triathlon. As in doing everything from creating the course, to coordinating with the appropriate government and local officials, to getting the word out so that people will attend. So she did it. And she did it very well. The result was the Devil’s Backbone TXTRI held at Canyon Lake, Texas on 22 March 2015. And it was a huge success!

I was a casual observer of this process at first. I remember when she told me she had set up a Limited Liability Company for her future race ventures and it didn’t mean much at the time. After all we were just friends and the sparks hadn’t flown yet. I had no idea what type of grand adventure I would become part of.

As our relationship grew, I volunteered to do what I could to help with her triathlon. Since this is a world that I am not at all familiar with, I wasn’t able to do a whole lot, but I helped where I could. Including the days leading up to, and the day of, the big event.

Kathy had planned her triathlon to take place at the end of her Spring Break, which gave her the better part of two weeks for last minute preparations. To help do this, we stayed at Potter’s Creek Park just down the road from where the event was being held at Canyon Park, a US Army Corp of Engineers facility that didn’t open until 1 April. As Canyon Park wasn’t yet open for the season, we had the run of the place.

The triathlon was held on a Sunday so Saturday was a day of preparation. Equipment was arriving and had to be setup, so we relocated to Canyon Park where the event was held, in order to be available for all the arrivals. The park was closed for another week, so we didn’t have to worry about visitors getting in the way.

We could park my house anywhere we wanted. So we chose the boat launch ramp parking lot. Naturally. I mean, what more glamorous place to spend a couple of nights. In reality, we chose that location as it was where the race was starting/finishing and where the race transition was. (Transition is a highly technical triathlon term that means where one goes, or transitions, from swimming to biking to running – see, you learned something new today. You are welcome!) In other words, the parking lot was the perfect place to put my house and be very close to the action.

Equipment actually started arriving Friday, so I made myself available to point and grunt showing where said equipment should go. I can now put on my resume that I have experience positioning porta-potties and light towers. I am sure these skills are in high demand!

Saturday consisted of marking the course, the timing people setting their equipment up, and packet pickup (where athletes arrive to get their race number and other information so they have a clue what to do).

Sunday morning, way earlier than one should be up, the fun started. Volunteers started arriving. Athletes started arriving. I had to pretend like I knew what I was doing so as to not scare the athletes off. Fortunately I was given the duty of being official photographer, so I didn’t find myself having to sound intelligent about triathlon stuff that much. Kathy was smart when she assigned me the photog position so I didn’t make too much of a fool of myself. Thanks, Kathy! 🙂

Let’s get this party started! 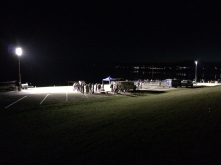 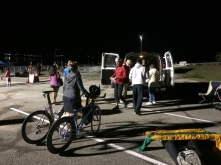 Sunrise saw an increase in athletes showing up 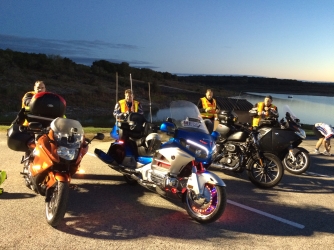 Motorcycle EMS for the bike course getting ready

Due to an extremely cold water temperature (thank you colder than normal Texas winter), the swimming part of the triathlon was cancelled. This meant that the running portion was split in two so the competition went like this – run half the normal distance, bike the full distance, then run the second half of the normal distance. 115 racers completed the event, which is a great number for a first year triathlon.

Let me tell you, for Kathy’s first triathlon she did a wonderful job! Everything went so smoothly. It seemed like she was doing this for years. She definitely had all her ducks in a row so come race day there was little margin for error. For the most part, things went along like a well-oiled machine, which is a VERY good thing. 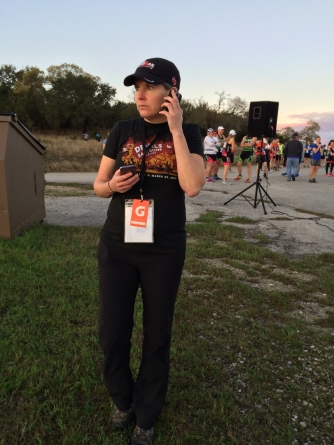 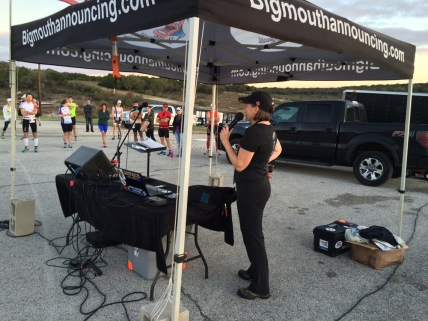 Kathy with the men’s overall winner

Putting a medal around the neck of a finisher 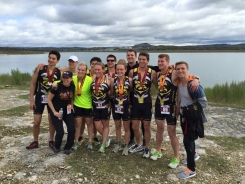 Kathy with the University of Iowa triathlon team

And the race is on! 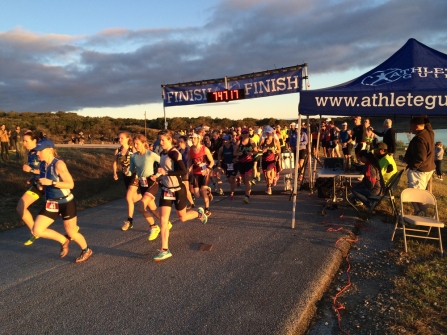 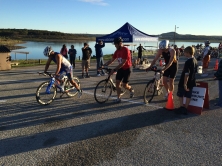 First biker is back, getting ready for second running portion

Returning from the ride

Transitioning back to running

Off to complete the second half of the run

The only hiccup in the well-oiled machine was when I heard the sound of air escaping a tire on my house. It seemed like that I was the “happy” recipient of my first flat tire thanks to a bolt I had picked up coming into the park. The “good” news is that the bolt chose to lodge itself in the shoulder of the tire – the area that is unrepairable. So I ended up having to purchase a new tire. And got the chance to use the jack I purchased for this purpose. Happy times! 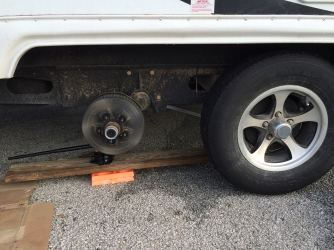 But other than the tire mishap, year one of the Devil’s Backbone TXTRI was a tremendous success and Kathy is working on making this an annual event. Guess I know where I will be in March 2016!