After the weekend that will be forgotten, I was looking for a Central Texas location to hang out for a bit before moving on to Canyon Lake, the site of Kathy’s upcoming triathlon. As in one she was putting on, not one she was participating in. But that post is coming in the future, so let’s not jump ahead, OK. Good. Glad you understand. Moving on…

Guadalupe River State Park has been on my radar for a bit simply because I knew that I wanted to stay in that general area and I like state parks. Having never stayed at a Texas State Park before, this would be a new adventure for me. So I made a reservation ahead of time and was looking forward to seeing what Texas State Parks had to offer.

As it turns out, my good friends, the Snowmads were looking to add another list of states they had stalked me in, so we made plans to hang out at Guadalupe River State Park for a few nights together before they continued heading west. We planned to arrive on the same day and I ended up arriving first, allowing me to find a couple of sites with good spacing and a cell signal.

Side note: While Texas State Parks take camping reservations, you are reserving the ability to stay there. You don’t reserve a particular spot. But in order to enter the park you have to have a spot assigned to you. If you are not familiar with the park, they most likely will give you a site number, then let you check out the campground and grab another (empty) site. You have to go back and swap out sites, which is exactly what I did once I located a suitable couple of sites for the Snowmad stalking. Them stalking me, cause I would never do such a thing. 😉 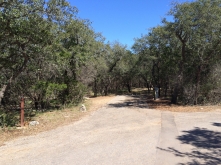 Verizon coverage was very spotty, to say the least, but I managed to find a section of sites that had (barely) usable signal. Fortunately I recently picked up an AT&T plan for just these situations, but ended up using that for my phone and my Verizon Mi-Fi for connecting to the Internets.

Time With The Snowmads

Love me some Snowmads! I first met them back in the ABQ and have now seen them in six states and counting. Jason and Kristin are great friends and I always jump at the chance to hang with them, so I was super-happy when they said they would come up to Guadalupe and hang for a few days. Gave me the chance to get my doggie fix! 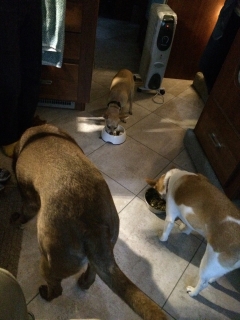 Unfortunately it was dreary and sometimes rainy weather the whole time they were there, so they didn’t get the chance to appreciate the park as much as they could have. Naturally the weather turned beautiful after they left and I saw the park in a better light (see what I did there?).

So we had to make due with hanging out in their RV (much larger than mine) after work and doing what we do best. That means having some beer and shooting the shit.

We even managed to head down to the big city (San Antonio – not that far of a drive to the south) one evening to meet Eric and Brittany, another fulltiming couple I had met a couple of times, but Jason and Kristin hadn’t yet. So we met at a brewery, which isn’t that odd of a place for the Snowmads and I to go to (we, um, have a bit of a history doing this sort of thing). Good beer. Good food. Even better company.

These signs are in all men’s restrooms in TX. I like the modification on this one.

Too soon the Snowmads were headed west as they were making their way to the great white north of Alaska for the summer, so I found myself alone at the park.

The centerpiece of the park is, wait for it, the Guadalupe River, which meanders through the north end. There is four miles of river frontage in the park, which makes for a peaceful setting. At least in March before the crowds arrive.

There is also a decent trail network ( Map – PDF ) that I took advantage of during my stay. The river splits the park and the north section of the park (across the river) is accessible only via a 40 or so minute drive through the country. I never made it up to this area and there are actually a decent trail network up there that will have to be explored another time. 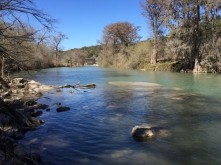 Popular tubing spot – in the summer 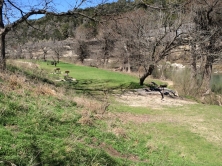 Picnic tables by the river

I saw some wild turkeys in the campground I was staying at (oddly enough called Turkey Sink) as well as my first, in the flesh, sighting of an armadillo. Combine this with the hiking that I got in, and I would say it was a fairly successful nature experience.

My first – armadillo, that is

My intention was to stay at Guadalupe River State Park for about a week and then move on to my next location for a two week stint leading up to Kathy’s marathon, but like all good plans written in mud, things changed. I was enjoying my stay so much that I extended it – twice – for a total of 11 nights.

The extension meant that I was now at the park during the start of Kathy’s Spring Break. The original plan was that she would join me for most of the two weeks at the next place I was headed, but since I hadn’t moved yet, she ended up staying with me for a bit at Guadalupe River. Which was great cause she hadn’t ever been to this particular state park.

One of the “perks” of this change in plan was that Kathy had to pay an extra vehicle charge since what I paid only allowed for one vehicle and the RV. Sigh. They sure know how to nickel and dime you, don’t they? Fortunately I had a Texas State Park pass that covered my daily entrance fee (on top of the daily camping fee), but Kathy wasn’t so lucky. This caused the total daily rate for what was paid for a single site to go up a bit. Whatever. It was only for a few nights.

I eventually moved to the next planned location at Canyon Lake, ending a very pleasant stay at my first Texas State Park. Looking forward to eventually staying at them all, something that I think I can accomplish seeing how I think I may be spending a good deal of time in the largest state in the contiguous 48.