Kathy went to undergraduate school at TCU in Fort Worth and has many fond memories of the school and the town, including attending football games. Having not been to a game in a while, she thought it would be a great idea for us to spend the weekend in town and watch the boys throw the pigskin around. Having never been to Fort Worth, or a college football game, I agreed. So off we went!

Wow, what a spectacle! For someone who has never attended a college football game, this was some game to have as the first. The TCU Horned Frogs played the Oklahoma Sooner and the Frogs won a close game 37-33. We had great seats in the end zone (in the shade, thankfully) and I got the whole college ball experience (which was very cool).

View from our seats

The crowd to get in

Parking was a nightmare and we ended up parking on some guys lawn for more than I would like to discuss. 🙂 But that is a whole other story.

Kathy and I walked around the campus so she could show me her old haunts and point out the many changes in the past couple of decades. It was great to hear her reminisce and tell me about what happened where. 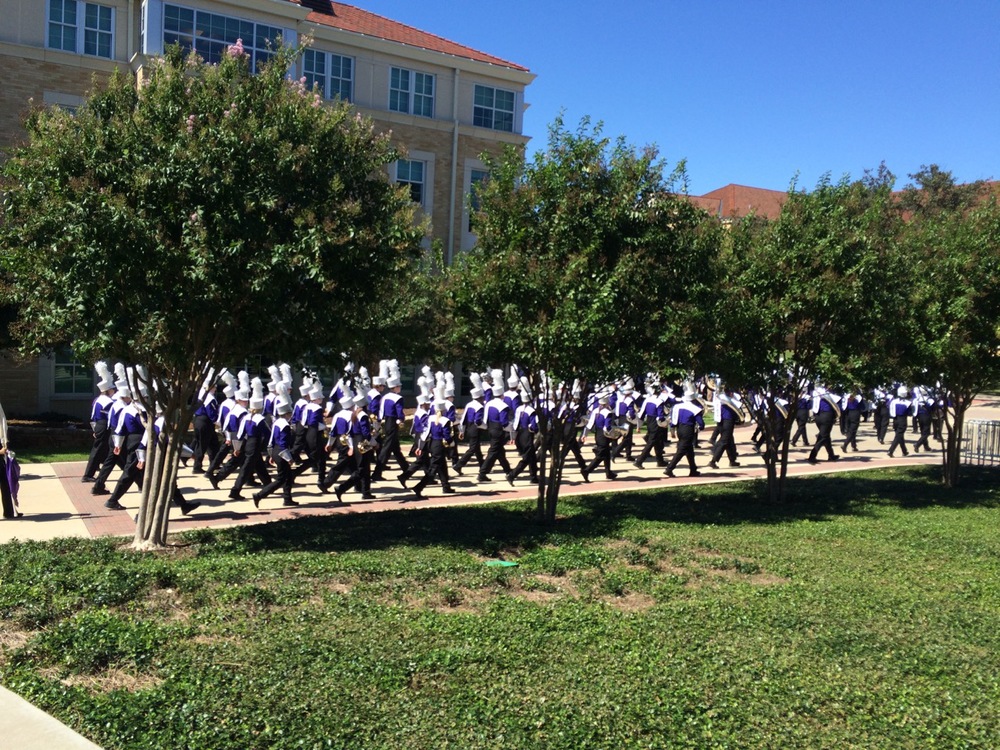 The band getting ready

Kathy is a big art museum buff and is doing her best to add some culture to my life, so we visited The Modern museum. I actually enjoyed the exhibits and the building itself is really spectacular.

On a subsequent trip we took a day trip up to Forth Worth to visit the Kimbell Art Museum, specifically their Faces of Impressionism, Portraits from the Musée d’Orsay exhibit. This exhibit started after our first Fort Worth visit and Kathy really wanted to see it. So we took a (very long) day trip and thoroughly enjoyed ourselves.

We saw many of the sites of the city, including taking a run down the Trinity Trail, cruising by the Stockyards, and spending an evening wandering Sundance Square.

There were certain aspects of Fort Worth that were very appealing, but I couldn’t get past the fact that it was in the plains, which tends to offer less geological diversity than I normally am attracted to.

Great town, though. Excellent trip! And I may someday be talked into attending another college football game.

Being out in the middle of nowhere means different thing to different people. To some it may mean just being outside of town. To others it means being in the middle of West Texas. One thing I think we can all agree on is driving 180 miles to pick up a package means you are pretty close to being in the middle of nowhere. That’s was yesterday’s “journey”. Tonight’s was by being joined by good friends Jen and Jesse ( @ontherogueus ) to watch the sunset from the dunes. I’m still in the middle of nowhere but I’m no longer by myself. 🤓
The other night I didn’t sleep well (shocker for those that know how “well” I sleep 🙄). Couldn’t concentrate at work so after a short conversation with my boss, I took the day off and played tourist. Ended up at this gem of a find off Route 66. Hiked to the top, walked the rim, contemplated the fate of the Universe. Ok, did 2 of the 3.
Other than a couple of in-transit overnighters, I haven't camped alone since June 2018. This week I'm getting some 'me' time after spending a few weeks being uber-social in the Las Vegas area. Looking forward to some solitude before getting back at it next week for a nomadic Friendsgiving get together. In the meantime, I'll be right here. A 'new to me' place that so far is proving to be the right choice.
I don't think I've dealt with an iced up vehicle since I was a teenager. So, yeah, it's been a while. . One of the advantages of having a house on wheels is that you don't have to deal with this stuff unless it turns you on. It definitely doesn't do anything for me, but I'm unable to head south quite yet. Soon. Very, very soon. . What sign do you take it's time to move to warmer weather? Or are you one of those people that enjoys cold, biting wind and iced up vehicles?
The great thing about this lifestyle is choices. Some people like the space of a large rig. Some people, like myself, are looking to downsize to a small, nimble rig that can fit just about anywhere. . Another cool thing about this lifestyle is learning how little one really needs in terms of material possessions. I have far less now then when I first launched in 2014. But not everyone does well with so little. For some it’s an ongoing quest to figure out where to stash all the things. . This is a new one for me. Never have I seen a coffin storage unit on top of a fifth wheel. A rig that has massive amounts of basement and interior storage compared to what I have. 🤷🏻‍♂️
The things you find while traveling across the country. This one was an unexpected surprise directly across the street from the overnight spot. You Millennials probably don’t have a clue who he is/was. 😯😬🤷🏻‍♂️
%d bloggers like this: