After I departed Huntsville, I was headed straight south to the white beaches of the panhandle of Florida. Problem is I couldn’t head there right away as I was facing a major holiday – Labor Day. The holiday that marks the end of summer isn’t exactly the time to be at the beach. Never mind I couldn’t get a reservation at any place I wanted to stay, I also had zero desire to deal with the masses looking for one last hurrah before the kiddies went back to school. As much as I love being in throngs of children (as if!), I needed to find someplace to spend the weekend.

I really had no idea where to stay, so I looked at the AllStays iOS app and was pleasantly surprised to find a large number of possibilities in Alabama, all about a days drive from my destination in Florida. So I basically threw a dart and picked one that was not too far off my route and looked like a good place to spend three nights over the holiday weekend.

After my very positive experience at US Army Corps of Engineers campground in Kentucky I was looking forward to trying out another one, so I chose the Prairie Creek Campground west of Montgomery. As it turns out, the campground was located about midway between Montgomery and Selma, which significance I will discuss in a bit.

I looked online to see if I needed reservations and decided I would be OK arriving without them. Boy, was I right! Turns out I scored a premium waterfront spot that was reserved until the morning of my arrival. I snapped it up at once when the campground host seemed surprised that it was available. Timing. Sometimes it boils down to timing.

Prairie Creek Campground has 55 RV sites with water and electricity and is located on a peninsula formed by the Alabama River. Some sites, including mine, are located on the water and have shared docks where you can park your fishing boat. But most of the sites are off water and if you bring your boat, you have to launch it at the campground’s boat ramp. So there I was at a prime waterfront site without a boat. Oh well! 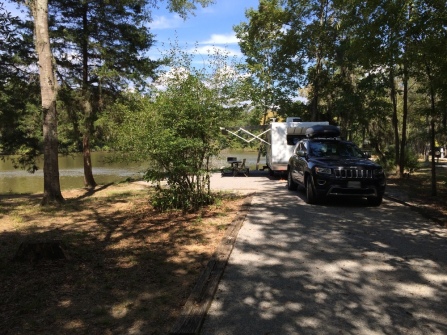 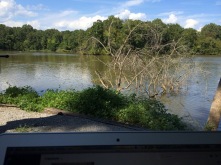 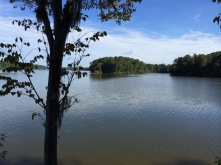 View from the peninsula’s point 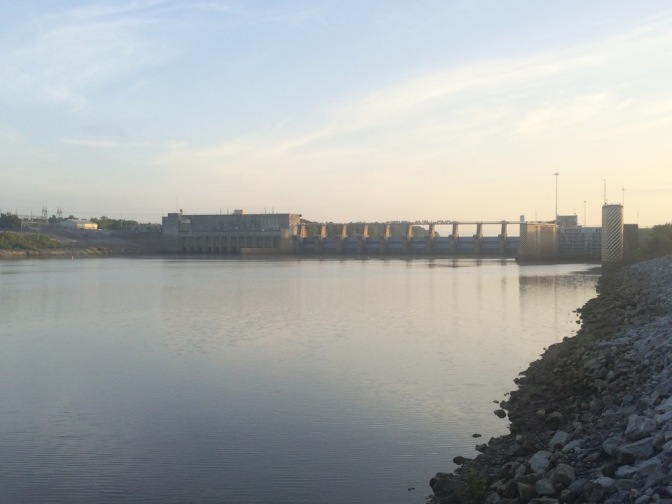 Damn, is that a dam?

I enjoyed a couple of bike rides around the campground and one down the road to a dam on the Alabama River. What I didn’t enjoy was the flakey Internet service, but that is what happens when one picks a campground literally in the boonies. Despite the Verizon coverage map showing I should be getting good LTE coverage, I was struggling to get a reliable signal. I ended up heading to the big city (Montgomery) one day to work after I was frustrated with the lack of a signal. #nomadproblems

When I picked Prairie Creek Campground I was clueless of the historical significance of its location. It wasn’t until I was driving down US Route 80 toward the campground and started to see historical markers and signage did the lightbulb in my mind faintly start to illuminate. Then I passed the Lowndes County Interpretive Center and that lightbulb started to get brighter. But it wasn’t until I jumped on Google did I have my ‘ah ha’ moment.

Here I thought I was going to spend a few days in the middle of nowhere Alabama, waiting out the holiday, and it turns out I had a great opportunity to learn about a very significant time in US Civil Rights history. So I jumped all over that chance!

The National Park Service is doing a great job documenting the marches, including establishing three interpretive centers – one in Selma, one about at the midway point of the march in Lowndes County, and one soon to be coming to Montgomery (whose groundbreaking ceremony took place right after Labor Day).

One day I headed to Selma, a kind of nothing town which played a key role in this time. I visited the interpretive center there and walked over the Edmund Pettus Bridge, which was the scene of Bloody Sunday, the first attempt at the march to Montgomery where marchers were beaten and gassed by state and local police. The bridge was also the scene of Turnaround Tuesday where the marchers stopped at the bridge and turned around to obey a court order to not march. Finally the courts decided to allow the march and the National Guard provided protection for the 5 day march to Montgomery. 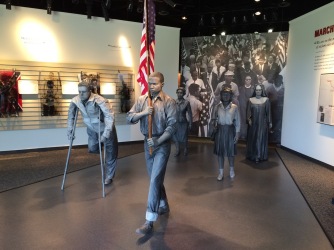 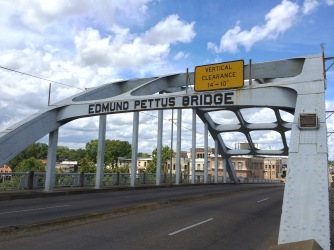 On a side note, I am always looking for good barbecue and I figured I would check out to see what Selma had to offer. Out came the Yelp app and I found Lannie’s Bar-B-Q Spot (sorry, not the kind of a place that has a website to link to) stuck in the middle of a neighborhood. The perfect spot, I thought! What a great place. I was the only white person there, yet I felt welcomed. The guy behind the counter taking my order was super nice and he made me chuckle when he wanted to make sure I knew the okra was fried. Guess he wasn’t sure if this white guy ate fried food. Love that! The food was decent, but the experience was priceless.

I visited the Lowndes Interpretive Center on another day. Located near the site of “Tent City”, where black sharecropping families ended up living after being evicted by the white landowners as punishment for wanting to vote. Yeah, proud American times, for sure.

I also drove the entire length of march route along US Route 80, where the National Park Service has posted signs at all the nightly camp sites and other significant places along the route. Very moving drive.

What was supposed to be a very quiet holiday weekend turned out to be a very educational experience. A great example of being open to new things when on the road as one never knows what is around the next corner.