After departing Albuquerque I was headed towards Angel Fire, NM for a handful of days, but first wanted to check out another National Monument. Bandelier National Monument is just south of Los Alamos, NM and offers a look at how the Ancestral Pueblo people lived back in the day. So that was my destination for one night on the way to Angle Fire.

Of course the journey to your destination is half the fun, so I decided to take the scenic route up through the Jemez Mountains, through the Santa Fe National Forest and finally cruising through the Valles Caldera National Preserve before reaching Bandelier. This was an incredibly gorgeous drive. 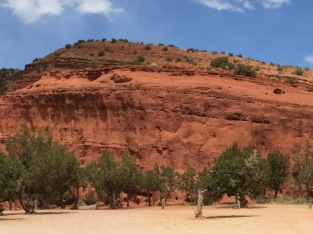 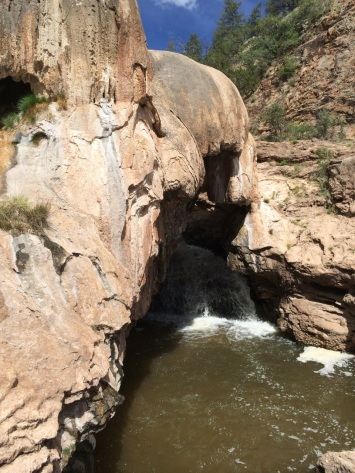 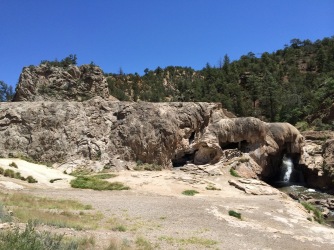 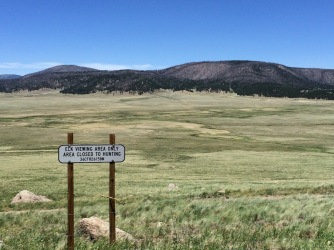 Once reaching Badelier I headed to Juniper Campground and the Coyote Loop under the recommendation of Amanda and Tim of Watsons Wander. I settled into site 43 and then hopped on my bike and headed to the self-pay kiosk which told me that site was not available. No worries, a very nice man, who wandered down to tell me how great of a backing in job I did, mentioned that space was occupied the previous night but the occupants left. I tried to hunt down the camp host, but they weren’t at their rig so I decided to stay put in that site. Until the camp host told me I had to move cause the people were coming back. Sigh. Off to site 39 I go. Of course the people never came back, so I could have stayed at the much nicer spot 43. 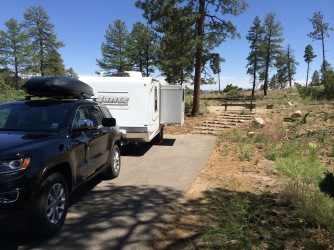 Between the time that I settled into site 43 and had to move to site 39, I decided to explore. By bike I covered about 6 miles, deciding I would head down to the visitor center at the bottom of the valley to purchase an America the Beautiful pass. I biked down about 2/3 of the way to the visitor center and stopped at a really cool overlook point and decided this was a terrible idea! I still had to descend hundreds of feet to the valley floor and was riding my bike in flip-flops. Yeah, not gonna happen, the climb back out of the valley, in flip-flops. So I headed back and caught the shuttle bus to the visitor center. Bought my pass and went back to my trailer.

View from the overlook. A long drop to go. Not gonna happen wearing flip-flops…

Then I went off on a quick 3 mile hike from the campground to Tyuonyi Overlook, which offered a bird’s eye view of the valley below and the village of Tyuonyi. It also offered a view of the trail I would hike to get the valley floor the next morning. 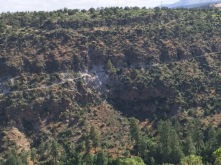 View across the valley of the trail leading to the backcountry

Ruins on the valley floor. Trail on left I would hike in the morning.

Don’t let the wind blow you over

Allen, the gentleman who commented on my superior backing skills (OK, maybe those weren’t his exact words) was camping with his friend Linda, both of whom I spent a while talking to that evening. I also ran into them in the valley the next morning. What a great couple of people! These are the types of people I look forward to meeting while on my journey.

The next morning I got up bright and early, ate breakfast, got my house ready to move, and parked it in the campground amphitheater parking lot, which is also where the shuttle bus to the valley floor (and the ruins) stopped. I decided to hike the Frey Trail, a 1.5 mile route which was the only way to get to the ruins before the road to the valley floor was built in the 1930’s. The Frey Trail is one spectacular hike, especially the last .5 mile stretch where you drop down into the valley. I would then catch the bus back once I was done exploring. 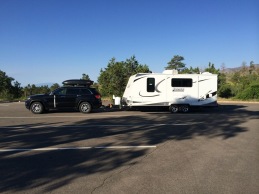 View of the outcropping I hiked to last night 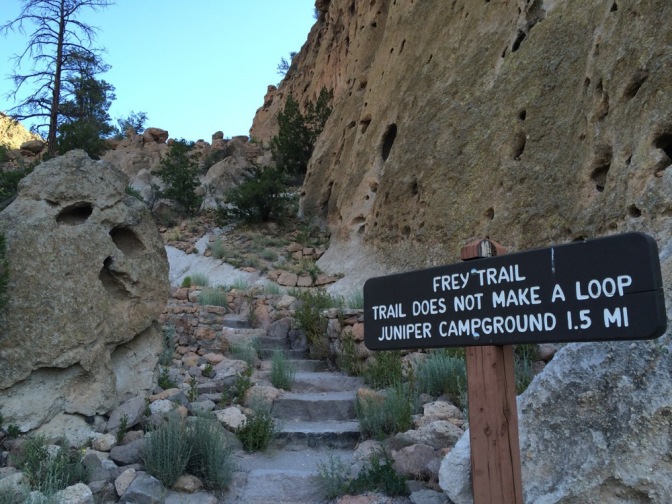 Bottom of the Frey Trail

There are literally thousands of archeological sites in Bandelier National Monument, and the public is only allowed access to one concentration of them in the Frijoles Canyon. This includes a fairly long stretch of sheer cliff face that once housed hundreds of cliff dwellings. There is also a section of cavates (CAVE-eights) that are literally cave rooms dug out of the cliff face and accessed by ladders. You can access several of these and get an idea of what it was like to live in a very small space (sound familiar?). Then there is the village of Tyuonyi, which was a series of hundreds of small rooms build around three kivas, all built on the valley floor away from the cliff dwellings. 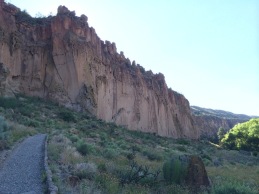 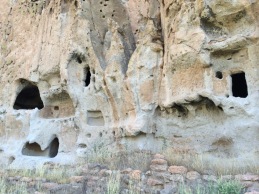 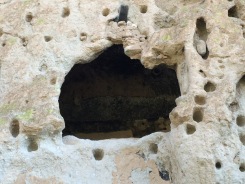 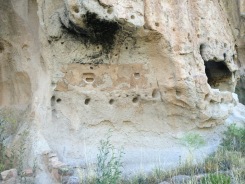 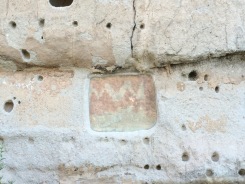 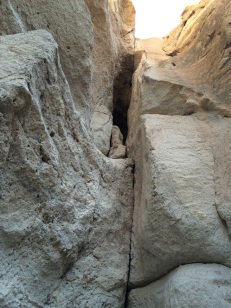 For the more adventurous there is a .5 mile hike up Frijoles Canyon where one gets to ascend a series of wooden ladders and steps carved into the cliff face, up 140 feet, to the Alcove House. High up the side of the cliff (yeah for being a bit afraid of heights) is rather large cave that has a kiva in one section. The kiva is an underground structure that was used for ceremonial purposes, as well as a meeting place. The kiva in the Alcove House has been restored but visitors are no longer allowed to climb down into it. So you just get to admire the wonderful view and think about how in the hell you are going to get down the face of the cliff. Not that this thought ever crossed my mind… 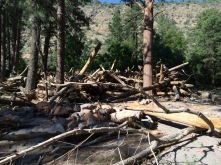 Plenty of evidence of the 2011 flood

I came up that? 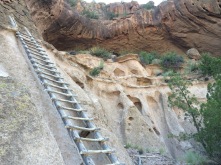 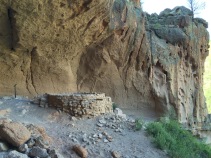 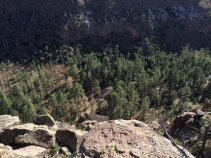 Don’t let the wind blow you over

Where is the elevator?

Overview of the climb

I ended my time in Bandelier by hiking the Falls Trail, which 3 miles roundtrip. This trail follows the Frijoles Creek as it goes over two waterfalls and eventually joins the Rio Grande. Unfortunately there was a massive flood in 2011 that washed out a portion of the trail, so it stops at the first falls and you can no longer go all the way to the Rio Grande. 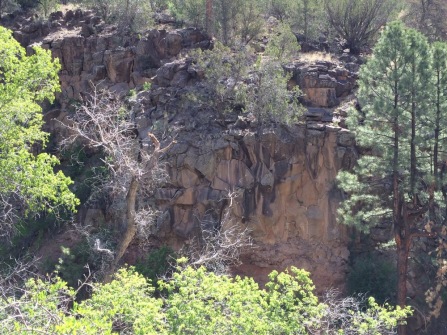 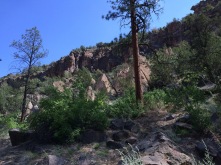 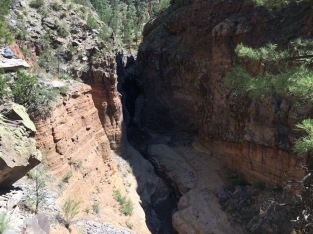 The upper falls in the shadows 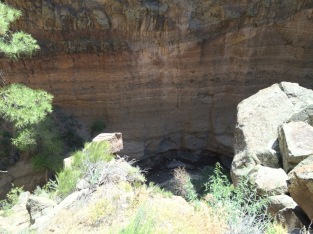 Rio Grande in the distance

Bandelier National Monument is a great place that takes you back hundreds of years in time while letting you enjoy some spectacular scenery. It is just one of the many outstanding locations that New Mexico has to offer. And this is just one of 50 states. I have my work cut our for me!