Towering due east of Albuquerque are the Sandia Mountains, topping out at 10,378 feet, or about 5,000 feet above the city below. You have two ways to get to the top of the Sandias. You can make the approximately one hour drive around the backside and up the Sandia Crest Scenic Byway, or you can take the 15 minute ride up the Sandia Peak Tramway [Edit: I was reminded there is a third way if you are in great shape – the La Luz Trail]. I chose to do the tramway. Why not? Heights and I get along, oh so well…

The Sandia Peak Tramway has a horizontal length of 2.7 miles making it North America’s longest aerial tram. It has a vertical rise of 3,819 feet, giving its passengers a spectacular view of the surrounding area. It only has two towers, which is quite incredible considering the distance it covers. The span between the second tower and the top terminal is 7,720 feet, or almost a mile and a half, making it the third longest single span in the world. The midpoint of this span is 900 feet above the valley floor, making someone like me who isn’t a huge fan of heights, just a bit nervous.

Jason points to Kiwanis Cabin after the failed attempt

Longest? Not what Wikipedia says! 😉 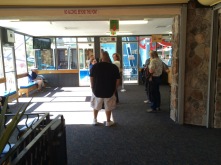 Enough about the specs! While this 48 year old tramway is definitely an engineering marvel, passengers really only care about the ride, right? So ride it I did one fine Sunday morning a few weeks back. I did it in the name of being social and engaging my fellow full-time RVers. I didn’t do it for the adventure or the great views. Nah! Who wants any of that?

I met Kristin and Jason, the Snowmads a while ago when they were staying in the ABQ for a few weeks. Like I have done with all the other full-time RVers I have met so far, I instantly hit it off with them. I wonder if our shared love of good beer had anything to do with it? In the interest of finding out, we visited many breweries in the ABQ. But that is another story for another time. Back to the tram!

The Snomads standing by, appropriately enough, some snow.

Kristin, Jason and I met at the bottom terminal of the tramway and joined quite a few other people for the journey up the mountain. Each car has a capacity of 50 people, and this one was pretty darn full. Good thing that I only have a mild fear of heights and am not claustrophobic as well!

The trip up (and down) was quite spectacular and informative. There is a tramway employee riding in the car each direction, giving details of what we were seeing. This includes the crash site of TWA Flight 260 which came to a tragic end in Domingo Baca Canyon (aka TWA Canyon) on 19 February 1955. Portions of the wreckage are still visible today – an eerie sight as you are dangling above the inhospitable terrain by just a cable. 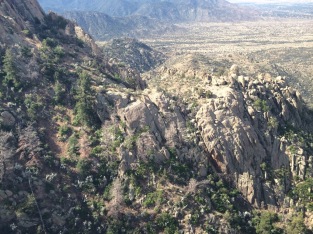 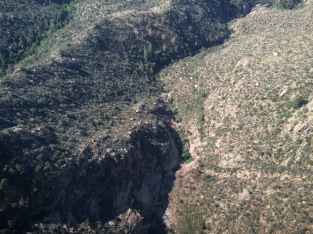 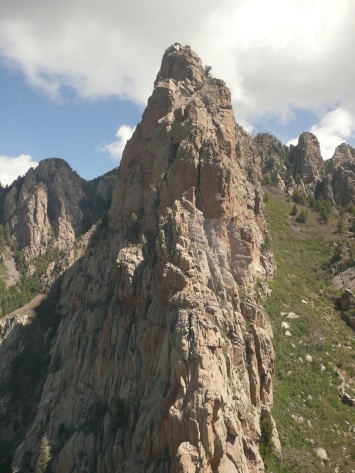 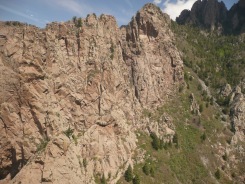 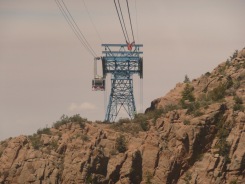 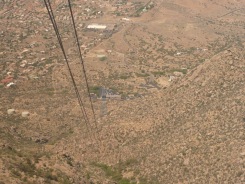 Um, that’s a long way down a very steep hill!

Top of the Tramway 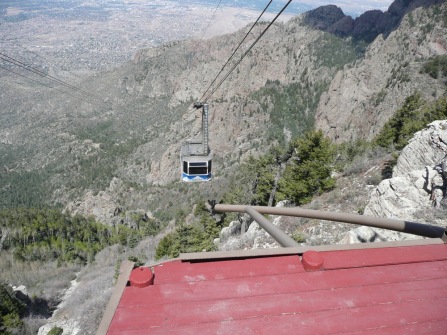 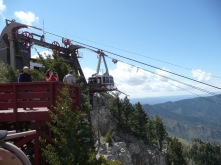 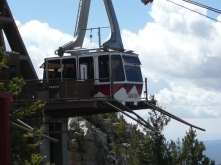 The second tower is on that far ridge

It was cold at the top. Really cold! As in the mid-30’s cold. A change from the very pleasant weather at the bottom. There was still snow at the top, so at least I got to see some white stuff while I was freezing.

There is quite an extensive network of hiking trails throughout the Sandias, and we took off down one of them in the hopes of making it to Kiwanis Cabin which is under two miles away from the top tramway terminal. However, we were ill prepared in that only one of us (raise your hand Jason) wore the correct hiking footwear (I didn’t even think that a hike would be in order at the top). So we went as far as we could until we decided we weren’t having a whole lot of fun hiking through the mud caused by the aforementioned snow melting. Sigh. Next time…

Jason points to Kiwanis Cabin after the failed attempt

Back to the top tramway terminal we went to queue up for the ride back to the bottom. A most spectacular ride indeed! The whole trip was well worth the slight nervousness I experienced being suspended from such heights. The things I do in the name of fun!